US Finally Pushing Back Against Chinese Communist Aggression: Sen. Cotton
0 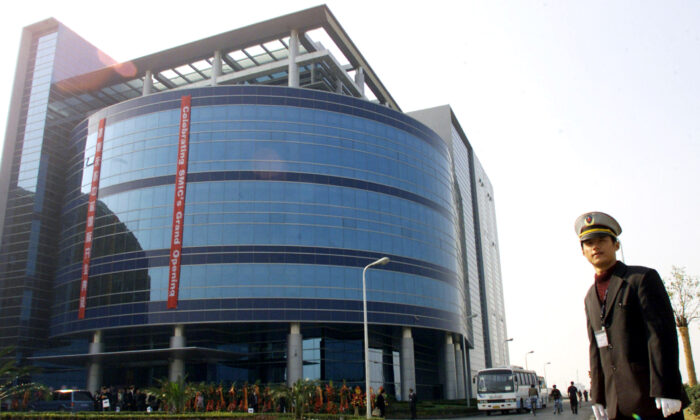 A security officer stands outside a building of Semiconductor Manufacturing International Corporation (SMIC) during its grand opening in Shanghai on Nov. 22, 2001. (Reuters)
China-US News

The United States has blocked American firms from doing business with China’s biggest chipmaker SMIC, over concerns about its alleged connections to the Chinese military.

The U.S. Department of Commerce issued a letter dated Sept. 25 to American companies asking them to acquire a government export license before they can sell certain technology to the Semiconductor Manufacturing International Corp. (SMIC) and its subsidiaries.

In the letter, the Bureau of Industry and Security under the Commerce Department stated that exports to SMIC pose an “unacceptable risk” of being diverted to “military end-use.” As a result, American suppliers “must submit an application for an individually validated license prior to exporting, reexporting, or transferring in-country” to SMIC.

Semiconductor chips power nearly all modern devices, from computers and cellphones to missiles and fighter jets.

SMIC said it had not received any official notice of the restrictions and said it has no relationship with the Chinese military.

“SMIC reiterates that it manufactures semiconductors and provides services solely for civilian and commercial end-users and end-uses,” SMIC said.

The Commerce Department said that while it would not comment on specific matters, it “is constantly monitoring and assessing any potential threats to U.S. national security and foreign policy interests” and “will take appropriate action as warranted.”

The administration is concerned about the Chinese Communist Party (CCP)’s state-directed initiative of “military-civil fusion,” which leverages cooperation between the military and private industry to advance technology innovations. The fusion effort is now overseen by a Chinese government agency called the Central Commission for the Development of Military-Civil Fusion, established in 2017.

In a Sept. 27 report by China’s hawkish state-run media Global Times, a veteran industry analyst named Ma Jihua said the impact of export restrictions on SMIC “could be catastrophic” for the Chinese chipmaker, since it had not made preparations in advance—unlike Chinese tech giant Huawei.

Taiwan’s Finance Ministry said in early September that the island’s chips exports in August topped $31.17 billion, an increase of 8.3 percent from a year earlier, according to Taiwan’s government-run Central News Agency. The export hike was due in part to the island’s exports of $1.5 to 2 billion to Huawei.

In recent weeks, some Taiwanese chipmakers have said they will apply for special U.S. licenses—in compliance with the export restrictions—in order to ship products to Huawei.

In early September, Reuters reported that the Trump administration was thinking about blacklisting the Chinese chipmaker, citing a Pentagon spokeswoman.

China is currently heavily dependent on foreign chips for its tech manufacturing, though Beijing aims to domestically produce 70 percent of its semiconductor needs by 2025, under its industrial policy of “Made in China 2025.”

On Sept. 3, Beijing promised to spend an additional $1.4 trillion through 2025 to boost its semiconductor industry, according to Bloomberg, citing unnamed sources.

China’s regional governments have been rolling out policies, such as incentives and government subsidies, in an effort to boost their local integrated circuit (IC) and semiconductor industries. According to China’s state-run news site 21st Century Business Herald, 7,021 new semiconductor companies were established from January to Sept. 1 this year, citing its own compiled data.

For example, the municipal government in Zhuhai city located in southern China’s Guangdong Province, announced on its website in mid-September that it aimed to boost the local IC industry to a value of 100 billion yuan ($2.9 billion) by the year 2025, with a set of new policies, including offering training and housing subsidies to new recruits at semiconductor companies.

However, it is unlikely China can become self-reliant on chips in the foreseeable future.

Jin Chun, a former engineer at Huawei’s research and development center in Nanjing, recently told NTD, an affiliate of The Epoch Times, that chipmaking could have more than a thousand different steps, and it would be impossible to get every single step correct simply by investing a lot of money.

“IC Insights forecasts that at least 50% of IC production in China in 2024 will come from foreign companies such as SK Hynix, Samsung, Intel, TSMC, UMC, and Powerchip with fabs in China,” the report stated.

UMC and Powerchip are both Taiwan-based semiconductor companies, while SK Hynix and Samsung are based in South Korea.