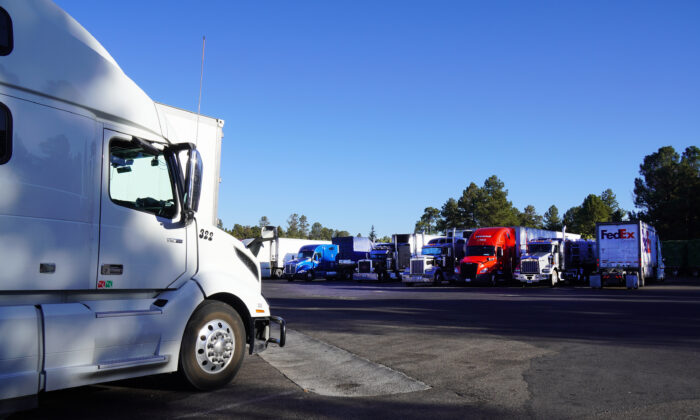 An organization representing trucking companies warned that proposed federal COVID-19 vaccine mandates may wreak significant damage on the U.S. supply chain amid a dearth of truckers and backlogs at the ports.

The American Trucking Associations (ATA) sent a letter to the Biden administration this week that warned such a mandate would cause problems within the industry. President Joe Biden on Sept. 9 announced that he would require businesses with 100 or more workers to have their employees get vaccinated or submit to weekly testing, while also saying that federal employees and federal contracting firms are required to get the shot.

“While much of the country was sequestered in their homes, the trucking industry served its essential function and did so successfully with safety standards developed by public health experts,” ATA President Chris Spear wrote in the letter.

While Spear said that he supports the goals to increase vaccinations across the United States, he suggested that federal mandates aren’t the way forward. “Placing vaccination mandates on employers, which in turn force employees to be vaccinated, will create a workforce crisis for our industry and the communities, families, and businesses we serve,” he commented.

More than a month after Biden’s announcement, the Occupational Safety and Health Administration submitted its emergency temporary standard to the Office of Management and Budget for review.

Later in his letter, Spear warned that if OSHA and the White House COVID-19 response team “continue on the paths they are on, the nation’s motor carriers—who supply 80 percent of the country and move 70 percent of all U.S. freight tonnage—could lose up to 37 percent of drivers” to firings, attrition to smaller trucking firms, or retirements.

“The U.S. is already facing unprecedented supply chain disruptions and delays due to many factors, including significant labor shortages, production shutdowns, a shortage of raw materials, and pent-up consumer demand,” the letter continued, citing data showing that the vaccine mandate may “further cripple the supply chain throughout the country” by forcing 13 percent of truck drivers to leave the industry entirely.

His warning comes as other business groups, including one that represents air cargo carriers like FedEx and UPS, asked Biden to rescind the rule ahead of the Christmas shopping season, where demand is almost certain to surge.

Contractors, including FedEx and UPS, have until Dec. 8 to mandate their employees to get the shot. Under the rule, those firms cannot have their employees opt out of the vaccine mandate otherwise they could potentially lose their agreements with the federal government.

Neither OSHA nor the White House has provided a firm timeline on when the emergency rule on private businesses would go into effect. OSHA and the Office of Management and Budget have not responded to several requests from The Epoch Times.