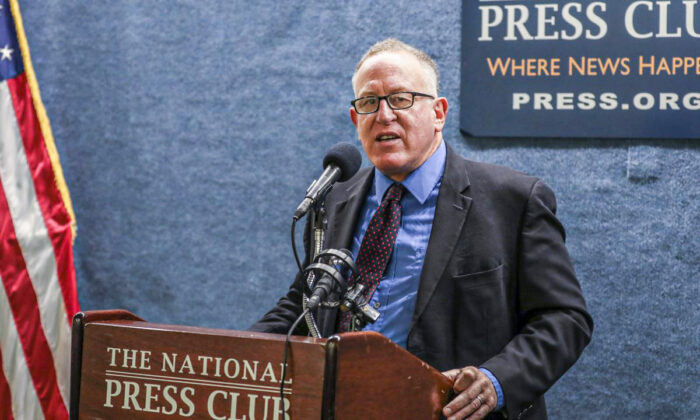 The recently released documentary “2000 Mules” by Dinesh D’Souza shows that there were about 2,000 individuals who received ballots from various nonprofit organizations and delivered them in the middle of the night to many mail-in dropboxes ahead of the 2020 election.

While those organizations’ names were not mentioned in the documentary, Trevor Loudon, who has researched radical left, Marxist, and terrorist movements for more than 30 years, said that there is a network of voter registration organizations set up by the Chinese Progressive Association (CPA) in San Francisco, a “front” organization for the Chinese Communist Party (CCP).

This network is called “Seed the Vote” and it has ties with a number of organizations set up in key swing states such as Black Leaders Organizing for Communities in Wisconsin, Detroit Action in Michigan, Living United For Change in Arizona, New Georgia Project in Georgia, and Pennsylvania Stands Up in Pennsylvania, Loudon said.

Seed the Vote claimed it won six of the seven states they targeted for Biden–Harris, Loudon told EpochTV’s “Crossroads” program.

The network operates in the black, Latino, and Asian communities out of the big cities in the seven key swing states, Loudon said. “What I believe they did [in 2020 election] was they lifted the black, Latino, Asian, Asian American, [and] university student vote in those inner cities to help mask the pre-planned vote fraud.”

Liberation Road is a socialist organization that draws from Marxist, Leninist, and Maoist ideologies, “with a clear focus on building the resistance to Trump,” its website reads. “We learn from the Chinese leader Mao Zedong, with his insistence that all correct ideas come ‘from the masses to the masses.’”

Loudon is “betting that these networks considerably overlap with the organizations that Dinesh D’Souza has identified as helping the actual fraudulent ballot harvesting, stuffing of boxes, etc.”

A long-time former executive director of the CPA in San Francisco, Alex Tom, helped to found a group called Asians for Black Lives, an allied organization of BLM, Loudon noted, adding that Tom also “helped to set up Seed the Vote.”

Tom openly boasts about his deep ties to the CCP, and about running his messaging past the Chinese Consulate, said Loudon, host of EpochTV’s “CounterPunch” program.

In 2019, Tom was the United States’ Soros equality fellow at the Open Society Foundations, which was founded and is chaired by George Soros.

“Voter registration organizations use legal means to organize people,” Loudon said. “It is not illegal to sign someone up to vote or to get them to the polls, but it is illegal if [the organization doing this is] a Chinese-backed operation,” he added.

The Epoch Times reached out to Seed the Vote for comment.

“Virginia was a Republican state for a long time. In 2008, it started to go blue because in 2005 Liberation Road, then still called Freedom Road Socialist Organization, set up a voter registration group in Virginia called New Virginia Majority (NVM),” Loudon said.

NVM registered 300,000 minority voters in Northern Virginia for the Democrats and worked with Terry McAuliffe, then-Governor of Virginia, to restore the voting rights of 200,000 felons, Loudon said. They used this 500,000 base to flip Virginia to Democrat in 2019, he continued.

After the 2019 election, NVM said in a statement: “With a remarkable turnout for an off-off election year, Virginians elected a majority of Democrats to the General Assembly. For the first time since 1993, Democrats govern all three legislative bodies.”

“In 2019, we knocked on over 500,000 doors, and we talked to voters about protecting their healthcare, and ensuring their children are safe in their neighborhoods and schools, regardless of where they live or where they come from,” Maya Castillo, New Virginia Majority’s political director, said in the statement.

NVM co-executive director Tram Nguyen published an op-ed in The New York Times, titled “Democrats could learn a lot from what happened in Virginia.”

“We try to reach voters of all colors, women, low-income workers, and young people where they are,” she wrote.

“We organized formerly incarcerated women and men to help them demand that their full civil rights be restored,” including voting rights, Nguyen said. “They were a key voting bloc [in 2016] in Virginia, the only Southern state that Hillary Clinton won.”

GIS is a very sophisticated technology to present voter demographic data such as ethnicity, voting patterns, and income levels in the form of a map.

McClure posted in his blog in 2011: “I have been recently working with Virginia New Majority to make a series of maps to inform planning for precinct walks in Virginia State house districts. … The results are subjective but do suggest … the ways that actual communities conform or diverge from the discrete territorial units which define an electoral terrain in a democracy.”

Loudon said he has documentary evidence that Liberation Road aims at flipping the southern states such as Virginia, North Carolina, Georgia, Florida, and Tennessee from Republican to Democrat. The organization calls these states New Confederacy because they are “the stronghold of the Republican Party and conservative Christianity,” he added.

“[Flipping] three or four southern states blue will destroy the Republican Party as a national force and ensure a Democratic party majority forever.”

Loudon posits that without even taking the fraud into account, the election was won for Democrats through voter registration, citing how Seed the Vote boasted that it won six out of seven states for Biden–Harris or how NVM boasted about flipping Virginia.

However, “these are Chinese connected organizations,” Loudon emphasized. “I think the Chinese stole the election using these networks on the ground” to sign people up to vote.

“It was voter registration groups on the ground, backed by pro-Chinese communists, collaborating with these nonprofits and voter registration organizations who actually committed serious fraud. So I think that both aspects of it can probably be connected to China somewhat in some way or another.”

The Epoch Times reached out to Liberation Road for comment.

Get Involved in Civic Affairs

To counteract these types of activities, Loudon advised people to get involved in civic affairs such as Moms for Liberty, a movement pushing back against the teaching of critical race theory in schools.

“They had a huge role in winning the election in Virginia [in 2021], taking back what the Chinese had done in Virginia,” he said.

“There’s been massive victories in recent times. In Wisconsin, whole school boards have been taken off the left. The same has happened recently in Texas. We had a recall in San Francisco, of all places.”

Loudon also recommended that every state should establish an office of election crimes to ensure election integrity like the one created in Florida.

At the end of April, Florida’s Gov. Ron DeSantis signed into law a bill strengthening voting rules in the state and establishing the nation’s first Office of Election Crimes and Security, specifically formed to investigate and prosecute voter fraud.

“Get your state to enact an election integrity body that you can complain to if you think there’s fraud in a school board election, or a county election, or a statewide election, even a federal election,” Loudon said.

If 20 or 30 states take measures similar to Florida it would transform this nation, Loudon pointed out.