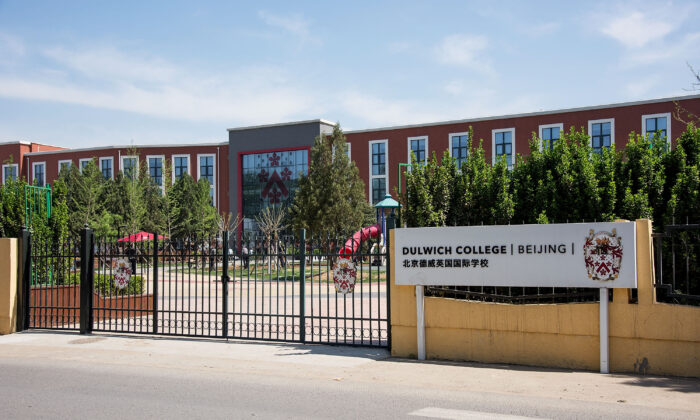 A general view of the Dulwich College in Beijing on April 25, 2015. (Xiaolu Chu/Getty Images)
UK

The profitable China franchises of several leading British private schools have close ties to the Chinese Communist Party (CCP), The Times of London has revealed.

In the past 15 years, 20 UK schools have made an estimated £67 million ($92 million) from international franchises, most of which are based in China. But according to a Times of London report published on Monday, CCP members and businessmen closely linked to the Party have been heavily involved in the establishment and operations of some of these franchises.

The Harrow International School Hong Kong, where fees can reach £30,000 ($41,000) a year, was built with an interest-free £22.5 million ($31 million) loan from the Hong Kong government, and its board includes four senior CCP members, the report said.

Dulwich College, another elite English school, has nine associated campuses in China. On the website of one of these schools, there are articles on CCP activities among staff members, including “elections” for a Party branch secretary and propaganda committee member.

Also according to the report, the founding members of Westminster School’s main Chinese campus include a Party secretary and a businessman who advises the Chinese communist regime on Tibet.

Concord College, a private school in Shropshire, has an affiliate in Shanghai, which is run in partnership with a businessman who owns a stake in a company that supplies equipment to the Chinese military.

Tom Tugendhat, a Conservative lawmaker who chairs the Foreign Affairs Committee of the House of Commons, told the paper: “Education is one of Britain’s great exports but these reports are concerning. British schools which open overseas branches need to be sure that the price they’re paying isn’t our values.”

Last December, the Inter-Parliamentary Alliance on China (IPAC), a global coalition of lawmakers, said it had obtained a database from an unidentified Chinese dissident, which showed that 1.95 million registered CCP members had been employed at universities, major corporations, and British consulates around the world.

According to British newspaper the Daily Mail, which reviewed the database, major aerospace companies Airbus, Rolls-Royce, and Boeing employed hundreds of CCP members.

Chinese academics with Party membership also worked at British universities, where they were involved in sensitive research including aerospace engineering and chemistry.

According to Australian scholar Clive Hamilton, Britain and Germany are most severely affected by CCP infiltration “because of their role in the world and because of the naivety of the top elites in those countries” in politics, business, academia, culture, and media.