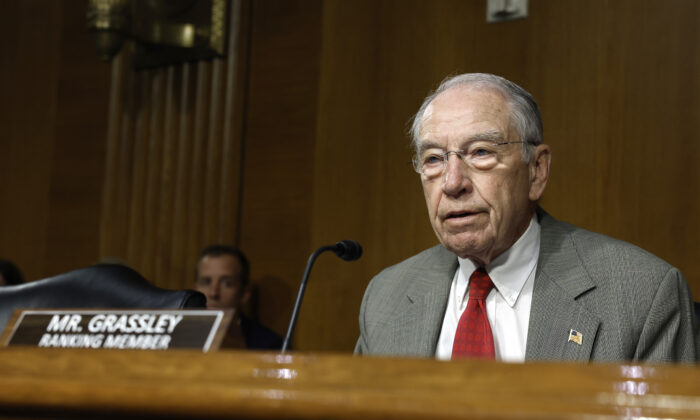 In remarks on the Senate floor, Sen. Chuck Grassley (R-Iowa) on Monday warned that alleged political bias in the FBI was hurting the bureau’s trust among Americans.

“Whistleblowers have told my office that the FBI maintains many sources that have provided extensive information on Hunter Biden. That information allegedly involves potential criminal activity such as money laundering,” he said from the Senate floor on Monday. “That’s the same criminal concern that Senator [Ron] Johnson and I raised in our 2020 Biden reports. According to allegations, the underlying information was verified and verifiable. However, instead of green-lighting investigative activity, the FBI shut it down.”

Last week, Grassley said he received whistleblower reports alleging widespread efforts within the FBI to downplay or discredit negative information about Hunter Biden, the son of President Joe Biden, according to a letter he sent to FBI Director Christopher Wray and Attorney General Merrick Garland on July 25.

The longtime senator, who is the ranking Republican on the Senate Judiciary Committee, said bureau whistleblowers came forward and said legitimate reports about Hunter Biden were characterized within the FBI as disinformation or were shut down quickly ahead of the 2020 election.

Previous letters from Grassley singled out FBI Assistant Special Agent in Charge Timothy Thibault, accusing him of potentially violating federal laws and rules established by the FBI. Namely, Grassley alleged there is evidence Thibault had partisan bias when handling investigations into the Trump campaign and Hunter Biden.

“Whistleblowers have reported to me, that although the FBI and Justice Department maintain policies dictating specific standards requiring substantial factual predication to initiate an investigation, Thibault and other Justice Department and FBI employees failed to comply with these requirements,” he wrote, adding that the agent “since been referred to the Office of Special Counsel for potential Hatch Act violations.”

During his Senate floor speech Monday, Grassley said that if FBI whistleblower allegations are accurate, both the FBI and Department of Justice “have been substantially corrupted.”

“Attorney General Garland and Director Wray: You have an obligation to the country to immediately investigate these allegations and clean house,” Grassley said.

Grassley’s comments came after Sen. Johnson (R-Wis.) told Fox News on July 31 that he believes there will be a “deal” to “seal all the information” relating to a possible indictment against Hunter Biden, who Republicans say was involved in spurious deals with state-tied companies in China and Ukraine. “The American public will never get the full truth,” the senator added.

The Epoch Times has contacted the FBI and DOJ for comment on Grassley’s claims. Both the FBI and Justice Department told CBS News last week that the agencies received Grassley’s letter but declined to comment further.