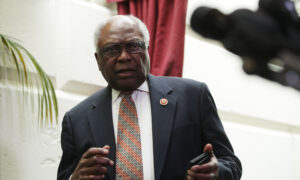 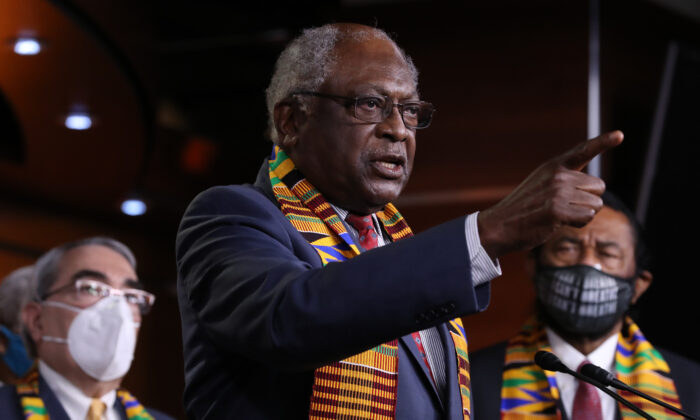 House Majority Whip James Clyburn (D-S.C.) joins fellow Democrats from the House and Senate to announce new legislation to end excessive use of force by police and make it easier to identify, track, and prosecute police misconduct at the U.S. Capitol in Washington on June 8, 2020. (Chip Somodevilla/Getty Images)
Democrats

Several top House Democrats have conceded they will likely reduce the White House-backed $3.5 trillion budget reconciliation bill after several moderate members of the party expressed opposition to the measure.

Rep. James Clyburn (D-S.C.), the third-ranking House Democrat, told CNN that the number could be lower.

“So it may be $3.5 (trillion), it may be really close to that or maybe closer to something else. So I think that we ought to really focus on the American people to think about what takes to get us in a good place and then let the numbers take care of themselves,” Clyburn said on CNN’s “State of the Union” program on Sunday.

Democrats, including House Speaker Nancy Pelosi (D-Calif.), have set Sept. 27 as a deadline to vote on an infrastructure package. But Clyburn said that Congress probably won’t meet the deadline.

“The question is, are we going to work to get to our goal for Sept. 27?” he said. “Yes, we are going to work hard to reach that goal, and sometimes you have to kind of stop the clock to get to the goal. We’ll do what’s necessary to get there.“

House Budget Committee Chairman John Yarmuth (D-Ky.) echoed his comments in a Sunday Fox News interview, saying it will “be somewhat less than $3.5 trillion.”  And he noted that “I would say we’re probably going to slip past the Sept. 27 date, sometime into early October would be my best guess.”

Some moderate members including Sens. Joe Manchin (D-W.Va.) and Kyrsten Sinema (D-Ariz.) said they won’t support the $3.5 trillion measure in its current form. Since Democrats have a slim 50-50 majority, any defection could potentially tank the measure.

Republicans have remained in total opposition to the massive spending package, which Democrats say can be passed via the budget reconciliation process.

“These are not frivolous matters. If we have a desperate deficiency in social infrastructure in this country, access to affordable child care, the absence of early childhood education, the infrastructure for senior care,” Yarmuth also said, “I think that’s what we need to focus on, not the money.”

It comes as the White House recently issued a warning in a letter to states that the United States could enter recession territory if the U.S. hits the debt ceiling.

“Hitting the debt ceiling could cause a recession,” the White House said in a letter (pdf) to state and local governments that was released on Sept. 17. “Economic growth would falter, unemployment would rise, and the labor market could lose millions of jobs.”