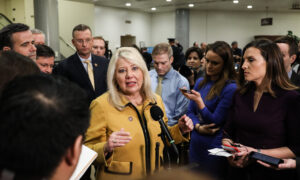 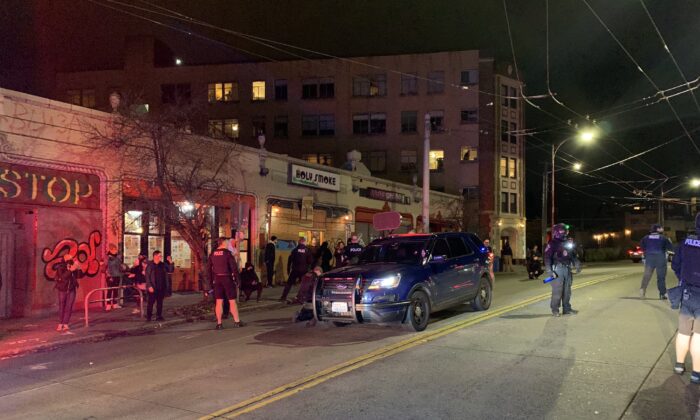 Seattle police made three arrests on Friday night during a demonstration on Capitol Hill, with one of those taken into custody accused of assaulting a police officer.

Sgt. Randy Huserik of the Seattle Police Department said in a statement that the arrests took place after officers announced a dispersal order when protesters blocked all lanes of traffic.

A third person was arrested for assault on a police officer, he added, noting that all three suspects were booked into the King County Jail.

Another group at Bellevue Ave E and E Olive Wy blocking traffic in all directions. Dispersal orders are now being given. pic.twitter.com/GeGVUQZKMq

The Seattle Fire Department was called to the scene after one of the people arrested allegedly suffered a medical condition that did not require hospitalization, according to the Capitol Hill Seattle Blog.

Police posted photos showing the damage to a Starbucks, and of a mural defaced by graffiti. Local outlet Independent Media PDX posted a video of some of the damage to the Starbucks and attributed the destruction to “a group of about 50 Seattle Antifa protesters.”

It came amid a day of rallies and protests in and around Seattle, including demonstrations in the University District, with reports of windows broken at the Henry Art Gallery and a Starbucks, according to local outlet KING5.

The outlet also reported that demonstrators entered the University of Washington premises, defaced a statue of George Washington, and sprayed graffiti on one of the buildings, though campus police made no arrests.

Seattle has been the site of numerous protests this year, along with a rise in anti-police sentiment, with demonstrators occupying a portion of the city for weeks over the summer.

The Seattle City Council on Monday voted to slash police funding by 18 percent as part of the city’s 2021 budget, while channeling millions to community programs, according to officials and reports.