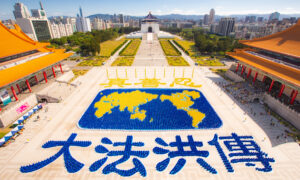 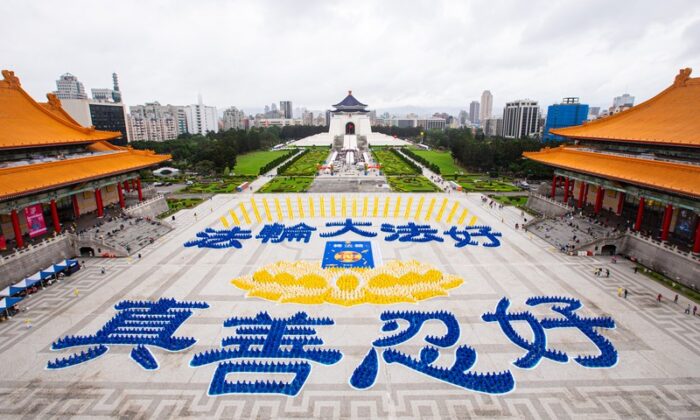 TAIPEI, Taiwan—About 5,400 people from all walks of life gathered in Taipei’s iconic Liberty Square on Dec. 5, in an annual tradition known as character formation that shines a light on an ongoing persecution in China.

Dressed in yellow, blue, or white, the participants were separated into groups before they filed orderly to sit on their allocated mats that matched color. These mats were arranged to make up a large composition, with an image of a book called “Zhuan Falun” at its center. Zhuan Falun is the main book of teachings for the spiritual practice Falun Gong, also known as Falun Dafa.

The book sat above a lotus flower. Above and below this image were nine traditional Chinese characters, which read, “Falun Dafa is Good” and “Truthfulness, Compassion, Tolerance are Good.” The three values are the core principles of Falun Gong.

Above the Chinese characters were multiple yellow strips, representing rays of light.

More than 5,000 #FalunGong practitioners gathered in #Taipei to form giant colored images of a book, lotus flower, and Chinese characters, under a light drizzle.

They want to tell people #FalunDafa spiritual practice is great and #Taiwan has freedoms not available in #China pic.twitter.com/gwfH9cHjWH

Huang Chun-mei, the event organizer and deputy chairwoman of the Taiwan Dafa Association, explained the significance behind the image in an interview with The Epoch Times.

“We chose this image as a response to the pandemic,” said Huang, expressing hope that people might come to know about Falun Gong if they want some help in times of difficulty.

The book displayed was no ordinary edition of “Zhuan Falun.” She explained that the book depicted an actual copy of the book a Taiwanese person brought back to Taiwan from China in the 1990s, before “Zhuan Falun” was being published on the island. It was thus one of the earliest editions of the book printed before the practice was banned by the Chinese communist regime in 1999, Huang said.

The tradition of groups of people forming pictures and characters related to Falun Gong started in mainland China before the persecution. It now lives on in other regions, including Taiwan and the United States, though Taiwan’s images are most elaborate given the large number of adherents living on the island.

There were 70 million to 100 million adherents in China prior to the persecution, according to official estimates at the time. Since then millions have been detained inside prisons, labor camps, and other facilities, with hundreds of thousands tortured while incarcerated, according to the Falun Dafa Information Center. There are over 4,000 documented deaths as a result of persecution, though experts say the true figure is likely much higher due to the extreme difficulty in verifying information in communist China.

Huang suggested that even foreigners can pick up a copy of Zhuan Falun—a book that she knows has changed the lives of so many people—since it has been translated into more than 40 languages.

Preparation for Saturday’s event began three days earlier with local adherents in Taipei showing up at Liberty Square to manually tape each colored-mat to the ground. They put the mats at their designated places under the supervision of Wu Ching-hsiang, a retired architect who created the blueprint for the image.

One of the participants in the character formation was Andres A., 39, from Argentina, who is currently studying Chinese at the National Taiwan Normal University in Taipei. He told The Epoch Times that he began practicing Falun Gong in 2005. As a result of the practice, he became very interested in traditional Chinese culture, which is why he came to Taiwan.

“By being here in Taiwan, I have the freedom to participate in this kind of activity,” he said, before adding “It shows the world, the contrast between the life in Taiwan, a free society, compared to living under a dictatorship in mainland China.”

Another participant in the character formation, Wan Yun-lin, 65, a Go board game instructor, told The Epoch Times that he took part in the event in the hopes that more people could come to know about Falun Gong, which he has been practicing for 22 years. Like many other adherents, he experienced dramatically improved health after taking up the practice.

After the character formation ended, adherents stood in long lines to perform the meditative exercises of Falun Gong.

The event caught the attention of many locals and tourists.

Marlous Harinck, a global business developer from the Netherlands who currently works in Taiwan, told The Epoch Times that she was very impressed by what she saw.

“What I see is, of course, it is very colorful. It is a very strong statement they are making. And I love it that there are so many people who stand for this, and who try to make it acceptable and well known,” she said.