The New Puritanical Religion in Action 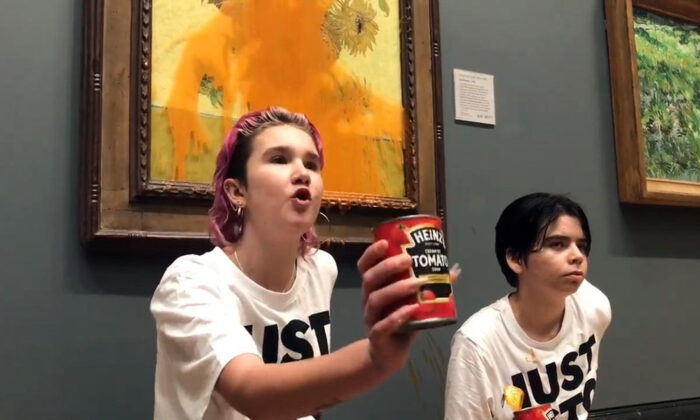 “Dost thou think because thou art virtuous there shall be no more cakes and ale?”—from William Shakespeare’s “Twelfth Night”

Youth is often said to be an age of idealism, but if my recollection of my own youth is accurate, it could also be characterized as an age of self-righteousness liberally dosed with hypocrisy, at least when it has known no real hardship that isn’t of its own making.

The two girls who threw soup at a Van Gogh in the National Gallery in London and then glued themselves to the wall certainly evinced a humorless self-righteousness and self-importance: Indeed, they seemed almost to secrete it as a physiological product. They were part of a movement of dogmatic and indoctrinated young people called Just Stop Oil that’s currently making a public nuisance of itself in this fashion in Britain, holding up traffic and causing misery to thousands, in the name of what it believes to be the best of all good causes, saving the planet.

After they had glued themselves to the wall, one of them, a young person with pink hair who appeared to take the lead in the action, intoned, with all the spontaneity of a confession at a Soviet show trial: “What is worth more, art or life? Is it worth more than food? Worth more than justice? Are you more concerned about the protection of a painting or the protection of our planet and people?”

Since millions of people, thanks to social media, have now seen the pair’s performance, exactly as they hoped, they are probably very pleased with themselves and are untroubled by any doubts about the connection between throwing soup at a painting and “protecting our planet and people.”

The spokeswoman for the pair went on to complain that many people in the country were facing a cold winter because of scarcity of energy and its consequent high cost. It seemed not to cross her mind to wonder why energy was now so scarce and so costly that many people were facing hardship conditions not experienced since wartime, and what part her ideology may have played in bringing this about.

Could it be, at least in part, because the lobby of eco-activists had made it politically difficult or impossible for governments and private companies to invest in the production of cheap energy? Without natural gas, oil, or nuclear power, against the use of all of which green ideologists have proselytized relentlessly for years, where was sufficient energy to come from? Alternative methods are both insufficient and unreliable: The irony is that, thanks to the success of the green movement, Germany is resorting again to the burning of lignite, the environmentally dirtiest of all forms of power generation. But the minds of the two young women, and those like them, are an irony-free zone.

Youth suffers from both fevered overimagination and a complete absence of imagination. This is the natural consequence of a lack of experience in life, in which limited experience is taken as the total of all possible human experience. Youth accepts uncritically its own wildest projections and doesn’t know the limitations of its own knowledge. It believes itself endowed with moral purity and allows for no ambiguity, let alone tragic choice. It’s sure of itself.

The young women who threw soup at the painting probably didn’t know that even if the man-made climate change hypothesis were wholly correct, they live in a country that produces only about 1 to 2 percent of the alleged greenhouse gases in the world. So even if their action put a complete end to that contribution (a most unlikely outcome), it would make absolutely no difference whatever to the fate of the planet. Their action certainly caused the public irritation and expense, and its most likely long-term outcome is a costly increase in surveillance and security at the gallery because the two of them were able to do what they did with such ease.

However, they were probably dimly aware, or had the good sense to know, that it would have been inadvisable for them to make their gesture in some country responsible for a far greater proportion of the alleged causation of climate change than their own—China, for example. Cowardice, after all, is the better part of self-righteousness.

For them, supposedly saving the planet from the effects of warming took the same kind of precedence that saving the souls of the population took for the Puritans, who in pursuit of the supposed moral purity that would lead everyone to heaven and avoid hell destroyed so much of the accumulated beauty of churches. What was more important, saving souls from the damnation brought about by the contemplation of idols, or saving the idols themselves in the name of beauty?

Indeed, their beauty was part of their danger: It was beauty that ensnared people and turned them away from the paths of righteousness. For the two young women, all that didn’t contribute to the salvation of the planet (except, almost certainly, their own enjoyments and such activities as dying hair pink) was a proper target for retribution.

The two young women were arrested, but it’s almost certain that any punishment they receive will be insufficient to deter like-minded (or like-feelinged) persons from following suit or doing even more damaging things. For a considerable part of the indoctrinated population, moreover, too-firm a punishment would turn them into martyrs for the cause. Some of those who witnessed their action and were interviewed afterward said that they sympathized with the cause, but thought the action was misplaced.

It was as if they were afraid to say that the cause itself was wrong or was responsible for far more harm than good, that the two young women were part of a movement to freeze old people to death or die from the excess of illness brought about by living in the cold.

One shouldn’t be too harsh on the young women, perhaps. In a sense, they too are victims. Climate change indoctrination now starts in primary school and continues through secondary education. It’s the new puritanical religion in action, and no more attractive than the old.

Theodore Dalrymple
Theodore Dalrymple is a retired doctor. He is contributing editor of the City Journal of New York and the author of 30 books, including “Life at the Bottom.” His latest book is “Embargo and Other Stories.”