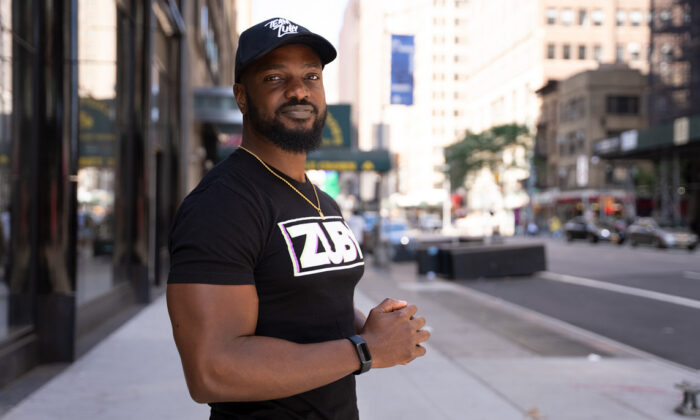 The Erosion of Truth

“Every person on this earth was birthed from a woman, every human who’s ever walked the planet,” says Zuby, rapper, author, podcaster, and fitness coach. “This shouldn’t be something that’s hotly contested, but that’s where we are.”

In a recent episode of “American Thought Leaders,” host Jan Jekielek sits down with Zuby (the stage name of Nzube Olisaebuka Udezue) to discuss his rise to fame and our current political moment, ranging from transgender athletes in women’s sports to the importance of personal responsibility.

Jan Jekielek: I was looking at your music video for “Underrated.” I thought to myself, let’s hear your origin story.

Zuby: I was born in the UK. My parents are originally from Nigeria. My dad’s a doctor, my mom used to be a journalist, and I’m the youngest of five kids. After living in the UK for a short time, my family moved to Saudi Arabia, so all my earliest memories started there. I was in the school system until fifth grade, an international school with an American curriculum.

When I was 11 years old, I went to boarding school in the UK. I went back and forth between the two countries multiple times per year. I did well in school and got into Oxford University, where I studied computer science. I also started my music career when I was in university, releasing my first album, “Commercial Underground” in 2006. I worked in the corporate world for three years, and, in 2011, I took the plunge to become a full-time musician.

I started as a rapper, putting out albums and touring around the UK and different countries. In 2019, I started my podcast, “Real Talk With Zuby,” and had my online viral explosion when I identified as a woman and broke the British women’s dead lift record.

Mr. Jekielek: What possessed you to do this dead lift scene?

Zuby: I’d been keeping an eye on this notion of people selecting their gender. Then stories started popping up where biological males were competing against women, and, in many cases, thrashing them, breaking their records in sports like swimming and weightlifting. And I thought, “This is crazy.”

Then I thought, “I’m really good at dead lifting. I wonder what the British women’s dead lift record is in my weight class.” I did a quick search, and I think it was 210 kilos. My personal best was 275, and I had a video on my phone where I was lifting 230. So I went on Twitter—I had 18,000 followers—and tweeted something along the lines of, “I keep hearing about how biological men have no strength advantage over women in 2019, so watch me destroy the British women’s dead lift record without trying. P.S. I identified as a woman whilst lifting the weight. Don’t be a bigot.”

I put that out, thinking it was kind of funny. Within 10 minutes, it had over 10,000 views. It hit 100,000 views within the first two hours. Likes, retweets, shares—it just went crazy. The next day, it hit a million views.

And it just snowballed. From September to November 2019, here in the [United] States I did some massive interviews: Joe Rogan, Ben Shapiro, Tucker Carlson, Candace Owens. That was the year the USA discovered me.

Mr. Jekielek: Who sees you as controversial?

Zuby: In a sane world, I would be one of the least controversial people. I’m a pretty straight, down-the-line guy. This is how I was raised. I’ve never been someone who swears a lot. I don’t drink alcohol. I’ve never done any drugs. I’ve never even smoked a cigarette. And when it comes to my opinions, they’re pretty sane.

My album from 2006 wasn’t controversial. If anything, people thought it wasn’t edgy enough. Here’s this Oxford boy trying to rap and he’s got nothing interesting to say. What’s funny is I have a lyric there where I say my ideas are inconceivable, like men giving birth. The wordplay, right? Now we’re living in a time where people are arguing that men can indeed give birth. Less than 16 years later, there is this debate: What is a woman? What is a man? It’s so odd. Ten years ago, even the most progressive person would agree that males shouldn’t compete against females in sports.

The notion that truth exists and is deeply important has really been eroded. You see this from individuals to institutions. The goal of academia should be the pursuit of truth, but now it’s about indoctrination and activist agendas. The goal of the news media should be to pursue and report on truth, but that doesn’t seem to be the interest anymore.

Politics is becoming more disingenuous. And the conversations around so many issues have become games of trying to demonize other people.

I recognize that a lot of things are gray. They are nuanced, and there are tradeoffs. But there are also things which are black and white. Two plus two does equal four. But if you can convince people that two plus two equals five, you can make them believe absurdities.

Every person on this earth was birthed from a woman, every human who’s ever walked the planet. This shouldn’t be something that’s hotly contested, but that’s where we are. And people often know the truth, but they’re afraid to say it. People who even ask questions are persecuted. So, you’ve got a debased society.

We’ve always agreed, for example, that children need special protection. Now, people are pushing against that line, saying that children can make life-altering decisions about themselves, or wanting to teach 6-year-olds about sexual topics. And look at this bizarre vaccination effort, where they’re trying to jab babies for something they have zero risk for. That’s a line, again, that’s being crossed.

Mr. Jekielek: Lowering the age of consent for vaccines is another element. And people moving to normalize pedophilia.

Zuby: Drag queen shows for children and having men stripping and twerking in front of 5-year-olds. How is that even a reality? Why am I seeing videos of grown men dancing for little kids, or little kids dancing for grown men in gay clubs? How on earth can anyone look at that and say, “Oh yeah, that’s good. That’s progressive.”

People who call themselves progressive are often regressing the society. We grew up saying, you don’t judge people based on their race. They’re now saying, “No, no, you must judge white people this way. You must talk to black people this way.”

These are steps backwards.

And when people have these grand notions of creating some type of utopia, it can rapidly turn into totalitarianism and dystopia.

Look at what happened throughout the so-called pandemic. This virus comes out. It’s got a scary name, and people are seeing videos of people dropping in the streets, and they’re hearing this and that, and it scares them. The media and the politicians are scaring people.

It was easy for governments to shut people in their houses, to force them to cover their faces, all under the guise of health, safety, science, and experts. Those are the four magic words they kept pumping out.

In early 2020, I thought, “Something is happening here, and the truth is not the truth.” Doctors and scientists were being silenced, and there was no room for dissent or argument. And I kept noticing the three-word sentences. Wash your hands. Practice social distancing. Wear a mask. Take the jab. It was duh, duh, duh. Duh, duh, duh. Like people being programmed.

Mr. Jekielek: Your children’s book is “The Candy Calamity.” One important theme in it is personal responsibility.

Zuby: Personal responsibility has also been eroded over the last few decades. This stems from the notion that human beings are somehow perfectible, blank slates who are products of their environment. If someone commits a crime, it’s purely because of environmental and social factors.

But I believe you have free will. You can’t choose the cards you’re dealt, but you can choose how you play the hand. The situation you’re born into, you have zero control over. You’re not in control of many things.

But the one thing you can control is yourself and your choices and reactions.

Mr. Jekielek: You’re essentially saying that we need strong moral principles, which religion has traditionally provided. But religion has also been eroded. What’s the way forward?

Zuby: I think there are multiple paths forward. I’m a Christian, and I still think traditional religions are strong paths for moral guidance that have worked for billions of people. Not everyone is a person of faith, but there are other ways one can find moral guidance, and stay away from nihilism and destruction.

What I’m advocating stems from genuinely wanting to see people fulfill their potential and to live upstanding, purposeful lives. Even if we can’t all maximize our potential, we can at least strive to do that.