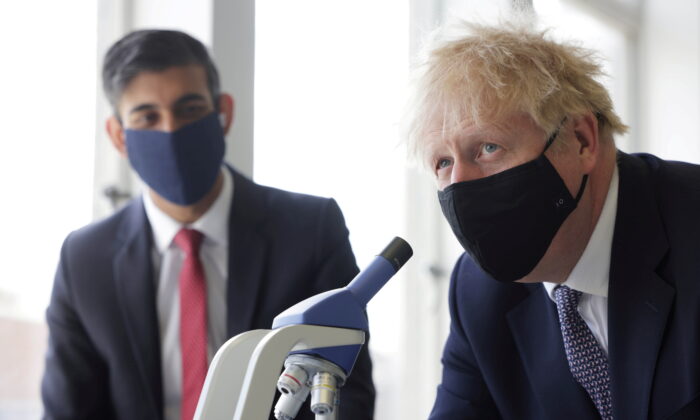 The Disgrace of the Old Guard

The news was everywhere this morning: Liz Truss, foreign secretary, is the new British Prime Minister. As usual, one had to dig deeper than the mainstream media line to find out why she won over Rishi Sunak, former chancellor of the Exchequer. Sunak had belatedly said that he was wrong to support lockdowns in the nation where the rights of the people must always prevail. Trouble is that no one believed him: he marched alongside Boris Johnson as the government drove the country to ruin.

He might have been anti-lockdown in his heart (in corde) but who cares? If you cannot stand up for civilization with your voice while taking risks to your career, what good are you when civilization is falling apart?

Truss, on the other hand, opposed lockdowns all along, she says, and when she was asked what to do, she always spoke on behalf of doing less and letting the people have their freedoms and rights. Probably she too could have done more to uphold British traditions, liberties, and law, but, given the choices, she was the most credible precisely because she became the most ferociously anti-lockdown of all options out there.

Some say she is still compromised, too tight with the World Economic Forum crowd, and ultimately lacking in the moral commitment to lead the revolution against the corruptions of the old guard. Perhaps true, but every revolution proceeds in three stages: the bad guys are thrown out, a transitional regime rises up, and finally a principled new generation comes to power on the promise of a completely new start.

This is stage one. That’s why Boris Johnson is toast. He backed lockdowns and vaccine mandates. He owns every bit of that. Now he is disgraced. Yes, there are plenty of personal issues and the media would lead you to believe that these matter more than his policies. Don’t believe a word of it.

This is only the latest evidence of the great upheaval in the world today. The old guard that either cheered the lockdowns or stayed silent is going down. That goes even for those who went along silently. A new generation that swears never to let it happen again is rising. This pattern exists in every institution in the world today, public or private. And there is still a third stage in which all the corruptions that caused the calamity are cut down, root and branch.

This is not just about politics, though you see this everywhere in the world today. The conservative governments that backed the lockdowns want everyone to forget what they did to betray their principles and people. But people will not forget. As for the labor/liberal/leftists who backed lockdowns and mandates long after their plausible utility, they are desperate to change the subject, but the subject will not be changed. They revealed their inner totalitarian longings and this will not be forgotten.

Media is similarly afflicted. CNN is going through a huge transition, with the CEO that led the network to support lockdowns and become a voice for the totalitarian left thrown to the dogs. The overt partisanship is now over, if only to save the business model. In the meantime, we are actually seeing evidence of some degree of diversity appear there. Even their China reporting has become watchable again.

Every media organ will go through this. It could even someday reach the New York Times.

It’s this way in Big Tech too. We have all the receipts showing how they all cooperated with government and Big Pharma to become agents of the state, crushing dissent and betraying all their users with censorious brutality. Platforms with millions of followers were deleted with malice. At some point, no one could tell the difference between Facebook and the CDC, and they both bragged about it.

No need to wonder why Mark Zuckerberg made the pathetic decision to change the name of the larger company to Meta. The very word Facebook has been disgraced too. It’s not just unfashionable; it is regarded as a tool of the old regime. The name Meta is a preposterous attempt to save face from this grim reality.

It’s happening in every institution. The grotesque reality is that when we needed some voice of opposition to the mass hysteria and global imposition of unconscionable violations of human rights and freedoms, where were they? They mostly went silent. You can count the institutional voices of opposition to lockdowns and mandates from early in the pandemic on one hand. They faced enormous abuse at the time but live to tell the tale with enormous credibility.

The political parties of the world are profoundly affected. The Democrats not only cheered the lockdowns but intensified them, keeping schools closed for two years. They deny it now but it’s absurd. They have become the party of lockdowns. That is their vision of the kind of society they want. The Republicans don’t fare much better, given that the lockdown happened when they controlled the White House and Senate. The leadership in particular will be overthrown in time.

The Libertarian Party is a minor player but even here we see how this dynamic plays out. The party apparatus had almost nothing to say about lockdowns for the whole of the election season of 2020. During the worst mass violations of human liberty and rights in our lifetimes, the party that claims to be the bulwark of principle fell silent. Two years later, the entire old guard was thrown out completely and replaced.

It’s true for institutions in the private sector, particularly think tanks and activist groups. Here too we have the receipts. We know for sure who spoke out and who deferred to the disgraced old guard.

Some of my favorite organizations from the past—ones I supported with speeches and donations—failed in the most horrible way. The disgrace is particularly deserved in the case of organizations that called themselves the “voice of liberty” who very easily became the voice of ruling-class lockdown ideology: let’s stay home and let the workers and peasants deliver groceries to us!

One publication that imagines itself to be some kind of champion of counterculture and defender of freedom used its own platform to blast me personally for opposing mask mandates. Masks, they wrote, are not tyranny but “a symbol of privacy and personal responsibility.” What’s more, they “are important for reducing the spread.” If we all comply, we can “avoid top-down impositions.” Great plan: if everyone would just go along with the plans of tyrants, no force will be necessary!

The editor of another major “conservative” publication advocated lockdowns and attacked defenders of the Constitution as his personal cause. He is now gone from said publication.

Intellectuals face the same problem. Some of my favorite thinkers including major gurus who had dedicated their lives to opposing government and celebrating civil liberties completely flopped. I would mention some major names here but I’m pretty sure everyone knows who they are. The internet makes the task easy: we can find out who said what, when, and why.

Many of these people are in hiding today or poking their heads out from under their sofas to talk about anything and everything other than their own apostasy. Few if any have attempted an apologia pro vita sua.

They won’t get away with this. The revolution is already happening. It will affect academic, political parties, Big Tech, media companies, think tanks and other institutions, and reach deeply into local politics simply because residents know for sure who among their local overlords deferred to the local tyrants of public-health.

In all these areas, the old guard discredited itself. Across the board, we are living through a great upheaval, one in which a pathetic and acquiescent leadership class is being overthrown and replaced. It does not happen all at once or even only one stage of change.

As the victory of Liz Truss shows, the change is here and far from complete. Lockdowns represented the evil triumph of a ghastly idea. The experiment failed in ways that utterly wrecked all the noblest ideals of civilization. It was done by the hand of individuals while those who should have spoken out stayed silent. There is a price to be paid now by those who did this, went along, or otherwise went quiet when we needed bravery and truth more than ever.