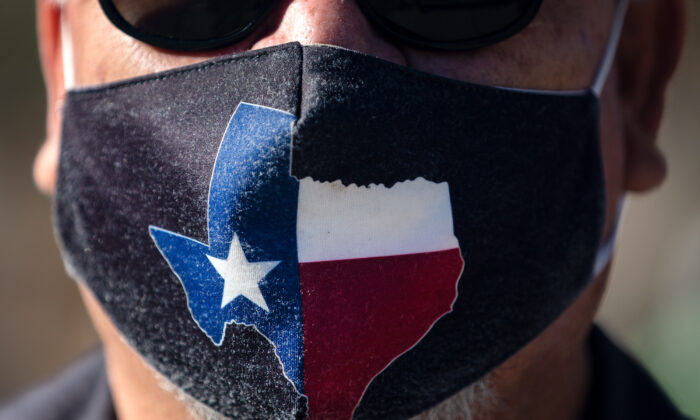 The pair issued a joint statement saying that the order requiring masks in certain areas violates an order issued earlier by the Republican governor that barred government entities and officials from doing so. Abbott said at the time that Texans, not government, should decide their best health practices.

Dallas County Judge Clay Jenkins signed an order on Wednesday requiring face masks as part of new safety plans to curb the transmission of COVID-19, the disease caused by the CCP (Chinese Communist Party) virus. Jenkins cited a surge in cases and hospitalizations to justify the measures.

Abbott and Paxton said in their press release that they are asking Texas’ 5th Court of Appeals to block Jenkins’ mask mandate.

Abbott and Paxton argued that the governor has the authority to decide how Texas responds to state emergencies under the Texas Disaster Act.

“Under Executive Order GA-38, no governmental entity can require or mandate the wearing of masks,” Abbott said. “The path forward relies on personal responsibility—not government mandates. The state of Texas will continue to vigorously fight the temporary restraining order to protect the rights and freedoms of all Texans.”

Paxton in a statement called government officials reinstating mask mandates and the judges who granted their temporary restraining orders against the Abbott’s mask ban “attention-grabbing judges” and “activist characters.”

“This isn’t the first time we have dealt with activist characters. It’s deja vu all over again,” Paxton said. “Attention-grabbing judges and mayors have defied executive orders before, when the pandemic first started, and the courts ruled on our side—the law. I’m confident the outcomes to any suits will side with liberty and individual choice, not mandates and government overreach.”

Abbott and Paxton said that “any school district, public university, or local government official that decides to defy the order will be taken to court.”

A hearing on the temporary injunction against the ban on mask mandates is set for Aug. 24.