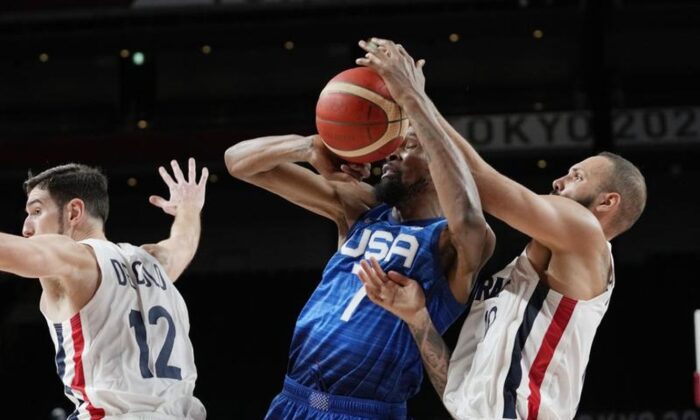 United States' forward Kevin Durant (7) and France's Evan Fournier fight for control of the ball during a men's basketball preliminary round game at the 2020 Summer Olympics in Saitama, Japan, on July 25, 2021. (AP Photo/Eric Gay)
Tokyo 2020 Olympics

The U.S. men’s basketball team, which hadn’t suffered a defeat at the Olympics since 2004, saw its 25-game winning streak at the Games come to an end on July 25 in an 83–76 group-stage loss to France.

A number of NBA superstars, including Golden State Warriors guard Steph Curry and Los Angeles Lakers star LeBron James, are not on the team after deciding to skip the Tokyo Games due to injuries.

France was led by the Boston Celtics’ Evan Fournier with 28 points and four rebounds, while fellow France star Rudy Gobert, who plays in the NBA for the Utah Jazz, added 14 points and nine rebounds.

France finished the game on a 16–2 run for the victory. Toward the end of the game, there was, according to an ESPN analysis, an “incredible possession in which the Americans managed to get five shots off and missed them all.”

“The final three were wide-open 3-point attempts by Zach LaVine, Kevin Durant, and Jrue Holiday,” the analysis said. “Team USA, loaded with offensive talent and built to be the best shooting team in the tournament, didn’t make a basket for the last 4 1/2 minutes.”

“Over and over the Americans got open looks, and over and over, they missed them. The team has various chemistry and timing challenges, but horrid execution cost it badly in this one.”

Team USA hadn’t lost an Olympic contest since it was defeated by Argentina during the 2004 Athens Games. That year, the Americans finished with three losses and settled for the bronze medal. Every other U.S. team in the era that started with the “Dream Team” in 1992—the first American Olympic team to feature active NBA players—has won the gold, and this one still can—but that’s far from certain.

The Tokyo Games, meanwhile, may be poised for major ratings declines as compared with previous Games.

The International Olympic Committee last year decided to postpone the 2020 Games due to the COVID-19 pandemic, and this year’s contests are occurring without spectators. Tokyo, meanwhile, is 13 hours ahead of the U.S. East Coast, which complicates the watching of some events.