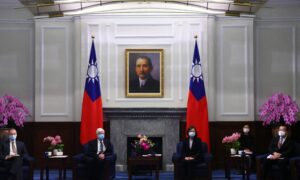 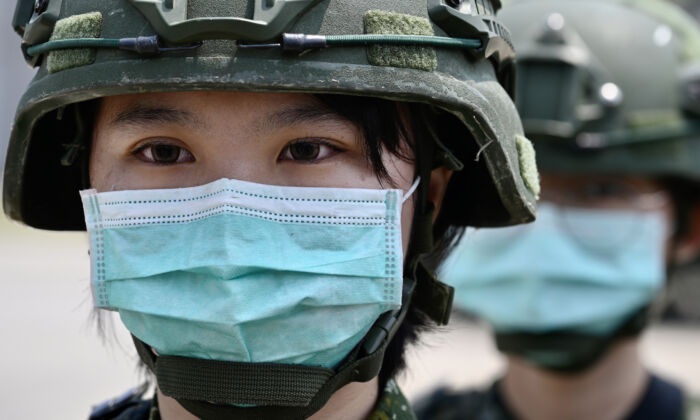 A female soldier stands in formation during Taiwan President Tsai Ing-wen's visit to a military base in Tainan, southern Taiwan, on April 9, 2020. (Sam Yeh/AFP via Getty Images)
Asia & Pacific

The Taiwanese president warned people that the Chinese regime launched psychological warfare campaign against the independent island on the late night of April 15.

Taiwan’s President Tsai Ing-wen clarified in a Facebook message that the psychological warfare the Chinese regime launched against Taiwan has more forms that are harder to recognize and which aim at trying to tear apart Taiwanese society and ultimately destroy the island’s democracy and freedom.

The latest campaign in the Chinese Communist Party’s psychological war was that it created and disseminated a fake document that pretended to have been released from the office of Taiwan’s president. The information is designed to cause division in Taiwanese society and make people turn against the leadership of Taiwan.

The document claimed that the Taiwanese government planned to import Japan’s Fukushima Daiichi nuclear power plant water to Taiwan for processing and disposition.

The nuclear power plant water contains radioactive material which could cause people to become ill, and many Taiwanese people would be vehemently opposed to the disposition of it in Taiwan.

In fact, the Taiwanese government banned food imports from Fukushima county and the four neighboring Japanese counties on March 25, 2011, after the nuclear accident on March 11 that was caused by a tsunami. The import ban remains in effect.

From the surface, the document used the official format that the presidential office uses, and the content was written in the official tone that the government uses.

Tsai pointed out three obvious flaws which can verify that the document is fake and was likely made by the Chinese regime.

The document was circulated on Twitter on April 15, but the issue date on the document is April 16, Tsai said.

Tsai concluded that this is a typical example of psychological warfare.

She then explained, according to Taiwan’s Institute for National Defence and Security Research, psychological warfare refers to an attempt to influence the opponent’s thinking and actions through the dissemination of information.

Examples of psychological warfare may include threats and intimidation by military aircraft, attempts to exert psychological pressure, the production and dissemination of false information, and attempts to disrupt and divide society.

Tsai said that she had talked about psychological warfare with the U.S. delegation that visited Taiwan from April 14 to April 16.

The delegation arrived in Taiwan on the same day that John Kerry, the U.S. special presidential envoy for climate, arrived in Shanghai, China for climate talks with his Chinese counterpart, Xie Zhenhua.

In Taiwan, Tsai hosted a banquet for the U.S. delegation at the presidential office on April 15.

During the banquet, the two sides exchanged views on regional issues, the global pandemic, economic and trade cooperation, and domestic political and economic developments in both the United States and Taiwan.