Taiwan Will Defend Differently Than Ukraine in Event of Chinese Invasion: Expert 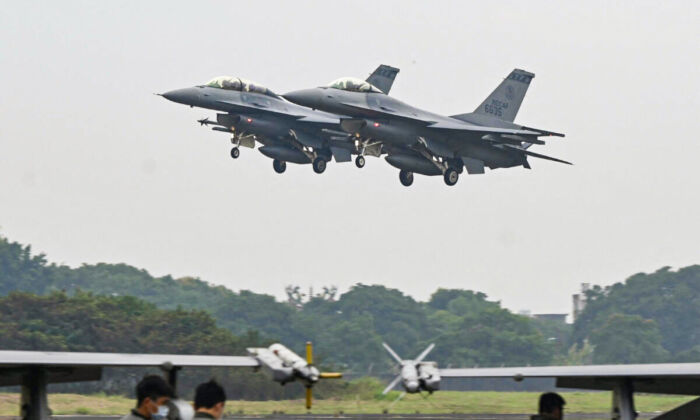 TAIPEI, Taiwan—Military strategists worldwide have been analyzing the war in Ukraine, particularly how Ukrainians have been able to stall the military advancement of much powerful Russia using mobile weapons, including Javelin anti-tank missiles and the Stinger portable air-defense system.

These strategists are making comparisons to Taiwan, an island that would also be fighting a much more powerful foe, should the Chinese regime take a cue from Russia and invade its democratic neighbor.

However, a China expert in Taiwan pointed out that Ukraine and Taiwan are fundamentally different, given that the former shares a land border with Russia, while the latter is an island that is separated from mainland China by a narrow body of water called Taiwan Strait.

Ding Shuh-fan, emeritus professor of the Graduate Institute of East Asia Studies at Taiwan’s National Chengchi University, told The Epoch Times that if the Taiwanese were using Javelin or Stinger to defend themselves, that would mean the Chinese military was about to land in Taiwan or has already landed, which would not be ideal in terms of defending the island’s sovereignty.

“What’s best for Taiwan is that their landing forces do not land in Taiwan at all,” Ding said.

“For example, if Chinese military forces begin to assemble, let’s say, in Fujian, we could potentially fire short-range missiles at their ports, particularly military ports, or strike their landing vessels.” Fujian is a southern Chinese Province that sits direct opposite Taiwan.

Of course, once the Chinese military starts to advance to the island’s shore, Taiwan would need to rely on Javelin and Stinger, just like the Ukrainians have done, as well as firing short-range missiles at their fighter jets, according to Ding.

The Chinese Communist Party sees Taiwan as a part of its territory even though the island is a de facto independent entity with its own liberal democratic government. In October, Chinese leader Xi Jinping vowed that the “reunification” of Taiwan with China would “definitely be realized.”

Russia’s invasion of Ukraine has fueled speculation that Xi would follow in Putin’s footsteps and decide to invade Taiwan.

The likely scenario is that China would start an attack against Taiwan by launching a barge of missiles at the island before it takes a brief pause to assess the success of its missile strikes, according to Ding.

During this short pause, Ding said Taiwan would need to assemble its forces, put together a counter strike to hit back at China’s military installments, including ports, radar stations, and missile launching sites. Ultimately, the goal would be to prevent China from sending out its invasion forces across the Taiwan Strait, he added.

As such, Ding said Taiwan’s current defense strategy—known either as multidomain deterrence or layered defense—is the right approach to defend Taiwan. He pointed out that Taiwan’s missile density is one of the highest in the world.

The United States, when approving a potential $100 million sale of equipment and services to Taiwan to boost the island’s Patriot missile defense system in February, said the proposed sale “will help to sustain the recipient’s missile density and ensure readiness for air operations.”

In May 2019, Taiwan President Tsai Ing-wen, held a press conference explaining the need for the island to further advance its asymmetric warfare capabilities in order to counter China’s military threats. As a result, she said local production of submarines and anti-aircraft and anti-ship missiles would speed up.

Submarines would be a great counter to Chinese naval fleets, Ding said, since they could be positioned at projected paths of invading ships, further reducing the chance of Beijing landing its forces in Taiwan.

Reservist training is one thing that Taiwan could do to boost its self-defense, Ding said. Another is having companies develop their own defense plan in case their own facilities are hit with Chinese missiles.

Taiwan’s Ministry of National Defense has announced that it planned to have 15,000 reservists train under a tougher training program for 14 days at 24 battalions across the island this year, according to Taiwans’ government-run Central News Agency.

Tsai acknowledged in 2021 that a small number of U.S. troops were training Taiwanese soldiers in Taiwan.