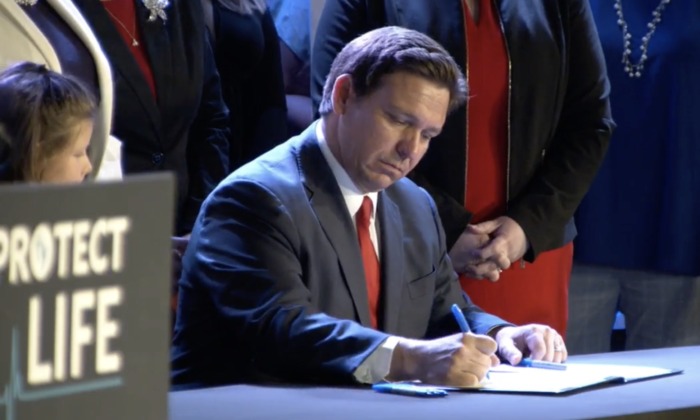 The lawsuit, filed by the Congregation L’Dor Va-Dor on June 17 in Leon Circuit Court, states that people who “do not share the religious views reflected in the act will suffer” and that it “threatens the Jewish people by imposing the laws of other religions upon Jews.”

“For Jews, all life is precious and thus the decision to bring new life into the world is not taken lightly or determined by state fiat,” the lawsuit said. “In Jewish law, abortion is necessary if required to protect the health, mental or physical well-being of the women or for many other reasons not permitted [by Florida’s law].”

“As such, the act prohibits Jewish women from practicing their faith free of government intrusion and this violates their privacy rights and religious freedom.”

The synagogue is the second to challenge the 15-week abortion ban, which is set to take effect on July 1. Planned Parenthood and other reproductive health providers filed a suit in early June in an effort to block the law.

DeSantis’ office said in a previous statement that it “is confident that this law will ultimately withstand all legal challenges.”

The lawsuits may be consolidated into a single case, and a hearing on the proposed injunction to block the law will likely be heard in the next two weeks.

The new Florida legislation closely mirrors a similar measure passed in Mississippi that is now before the U.S. Supreme Court and may be used to overturn the 1973 Roe v. Wade decision, according to a leaked draft opinion. A final ruling is expected by the end of June.

The synagogue’s website states, “we practice an all-inclusive, universal, and rational approach to Judaism where all are welcome through our doors, both virtually and literally. It is a Judaism that honors tradition, respects science and celebrates spirituality.”

Silver, an attorney and former Democratic state legislator, is a self-described “social activist” and brands himself a “Rabbi-rouser” on his website.

When “separation of religions and government crumbles, religious minorities such as Jews often suffer,” he told reporters, pointing out that the governor signed the bill into law at an evangelical Christian church.

The “Reducing Fetal and Infant Mortality” bill, or HB 5, that DeSantis signed in February contains exceptions if the abortion is necessary to save the life of the mother or if the fetus has a fatal abnormality. However, it does not address cases of rape or incest.

Until the law goes into effect, women in Florida can have an abortion up to 24 weeks of pregnancy. The new legislation cuts that time period by nine weeks.