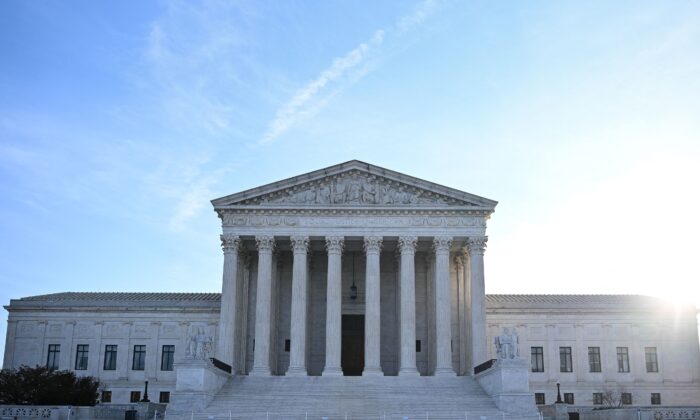 The U.S. Supreme Court is seen in Washington, on Feb. 8, 2022. (Mandel Ngan/AFP via Getty Images)
Judiciary

Justices declined to hear arguments for and against an appeals court decision that left the mandate, which affects all health care workers in Maine, intact.

At least six justices rejected the writ of certiorari, or request to review the lower court decision denying a preliminary injunction. How each justice voted wasn’t made public.

“It’s very disappointing to see the court ignoring this clear injustice,” Mathew Staver, chairman of Liberty Counsel, the legal group representing the petitioners, told The Epoch Times. “We thought it was a great case for the court to take. There’s a clear conflict and a clear violation of federal law.”

The office of Maine Attorney General Aaron Frey, a Democrat, told The Epoch Times in an email: “The Supreme Court has once again declined to review the lower court rulings upholding Maine’s COVID-19 vaccination requirement for healthcare workers. Maine’s vaccination rule is constitutional and remains in place. We will continue to defend the rule, which is critical for the protection of patients, healthcare workers, and Maine’s healthcare system against COVID-19.”

Maine Gov. Janet Mills, a Democrat, announced the mandate in August 2021. She said requiring workers to get a COVID-19 vaccine would “[protect] health care workers, their patients, including our most vulnerable, and our health care capacity.”

Shortly after, the state stopped allowing religious exemptions to mandatory vaccinations, which a group of health care workers said violated the U.S. Constitution and federal law.

U.S. District Judge Jon Levy, an Obama nominee, turned down a request for a preliminary injunction against the mandate, and the U.S. First Circuit Court of Appeals upheld his ruling. Levy, citing the Centers for Disease Control and Prevention, alleged vaccines help prevent COVID-19 infection and ruled that the mandate was “narrowly tailored to serve the compelling interest of containing the spread of this serious communicable disease.” He also concluded the health care workers had not proven the mandate violated the First Amendment’s Free Exercise Clause, with which the appeals court agreed.

That prompted an application for relief to the nation’s highest court, which turned down the request in October 2021.

Petitioners then filed a writ of certiorari, asking justices to take time to review the lower court decisions. They asserted the appeals court erred in its ruling, including when it found that the availability of medical exemptions without any consideration of religious exemption requests does not violate the First Amendment.

Mills, in a response through government lawyers, said that the lower courts were correct in finding the mandate likely does not violate the First Amendment, describing the mandate as not “designed to infringe or restrict a particular religious practice” and necessary to achieve herd immunity.

The petitioners disagreed. “Because Maine’s vaccine mandate permits nonreligious medical exemptions for virtually any reason, but prohibits individuals from obtaining an identical exemption based on sincerely held religious beliefs, it is not neutral or generally applicable. Put simply, Maine’s vaccine mandate cannot be viewed as neutral because it explicitly discriminates against religious exemptions while permitting the preferred nonreligious, medical exemptions,” they said in the last filing before the Supreme Court’s decision.

The case will continue at the appeals court on its underlying merits, and could end up back at the Supreme Court.