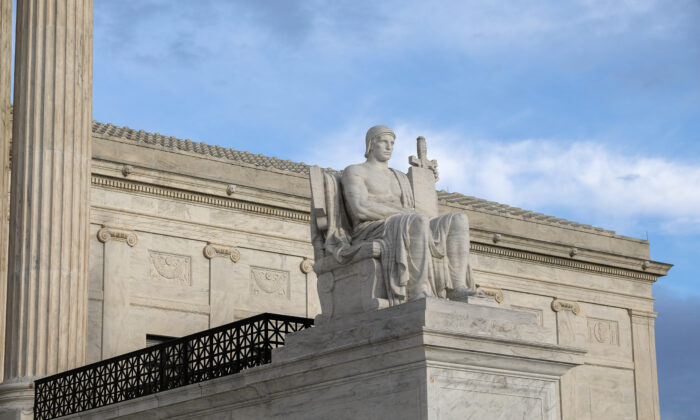 The Authority of Law statue of the Supreme Court in Washington on March 10, 2020. (Samira Bouaou/The Epoch Times)
Judiciary

The Supreme Court on June 15 declined to revisit a widely debated legal doctrine—known as “qualified immunity”—that insulates police officers from civil liability for their conduct.

The high court said it won’t hear eight major cases (pdf) that presented opportunities for the justices to reconsider the qualified immunity doctrine, which shields government officials from liability for damages claims for harm caused by their actions as they perform official duties, even if those actions violated the U.S. Constitution but didn’t contravene a “clearly established” rule.

Many legal circles, advocacy groups, and members of the judiciary on both sides of the aisle have raised concerns about the doctrine’s application. In particular, the doctrine’s “clearly established” rule, which requires the party suing the official to show that the facts in their case were sufficiently similar to the facts in prior court cases, has been widely criticized.

The court’s decision to reject these cases let stand lower court rulings, such as one that granted immunity to an officer who shot 10-year-old child while trying to shoot a non-threatening family dog (pdf) and another in which officers deployed a police dog against a suspect who was sitting on the ground with his hands up.

“There is no shortage of outrageous qualified immunity cases for the Supreme Court to take,” Institute of Justice attorney Patrick Jaicomo said in a statement.

“It has refused to hear a case this year, but it can only avoid the issue for so long. The skewed incentives of qualified immunity guarantee that lower courts will continue to generate more examples of injustice, and we will keep bringing those examples back to the courthouse steps until we break through.”

The court’s decision wasn’t entirely unanimous, with Justice Clarence Thomas, who has previously criticized the doctrine, writing in a dissent in one of the cases, Baxter v. Bracey (pdf), that he would have granted the petition to review the case. The Baxter case involves officers who released a police dog on a suspect to arrest him. In the process, the dog bit the suspect. The suspect alleged that he had already surrendered when the dog was released to arrest him.

Qualified immunity was created by the Supreme Court in 1982 as part of the top court’s interpretation of 42 U.S.C. Section 1983, commonly known as Section 1983, which provides a basis for people to sue state officials who violate a person’s constitutional rights. However, under the Supreme Court’s current interpretation of the law, it isn’t enough to show that the rights are violated. Victims must also show that the action was “clearly established,” and if they fail, the official could be granted qualified immunity.

The rationale behind the doctrine is to afford government officials protection from undue interference and threats of liability while they perform their duties. It is meant to protect all but “the plainly incompetent or those who knowingly violate the law.”

But legal experts say qualified immunity has routinely shielded those who are either incompetent and who knowingly violate the law.

McNamara and other critics see the doctrine as a free pass for police officers and other government officials to violate constitutional rights without having to face the legal consequences of the actions.

Meanwhile, Rafael Mangual, the deputy director of legal policy at the Manhattan Institute and a contributing editor of City Journal, wrote in an op-ed published in The Wall Street Journal that the argument in which qualified immunity “undermines police accountability and encourage bad behavior” may not hold ground when the doctrine is used only in a small number of cases.

“It isn’t successfully invoked that often,” Mangual wrote in his op-ed, citing a 2017 Yale Law Journal study, which found only 3.9 percent of nearly 1,000 cases, where the doctrine could be asserted, were dismissed on immunity grounds.

The issue of qualified immunity came back in the spotlight in the wake of the death of George Floyd, who died while taking a knee to the neck by a Minneapolis police officer for nearly nine minutes during an arrest. His death sparked nationwide protests that called for changes in policing practices and police accountability. While many of the protests were peaceful, some cities experienced looting, arson, property destruction, and other violent activities.

Lawmakers have also taken up the issue and two bills have been introduced to limit or abolish the doctrine. One of the bills—Ending Qualified Immunity Act—introduced by Reps. Justin Amash (L-Mich.) and Ayanna Pressley (D-Mass.) seek to “eliminate qualified immunity and restore Americans’ ability to obtain relief when state and local officials, including police officers, violate their legal and constitutionally secured rights.”

Meanwhile, several lawmakers have introduced the Justice in Policing Act of 2020 that would bring reforms to qualified immunity to lift barriers for individuals from recovering damages when police violate their constitutional rights.