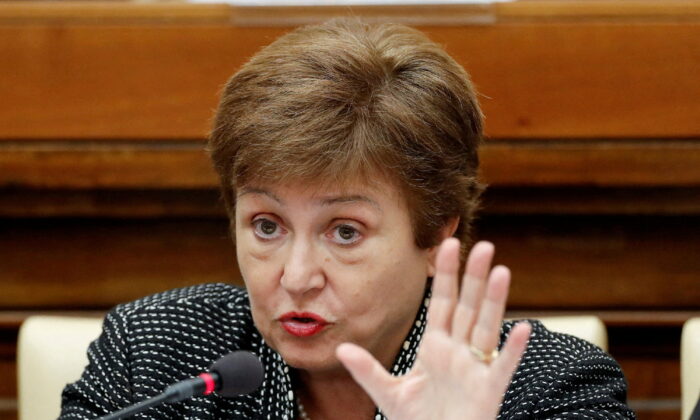 IMF Managing Director Kristalina Georgieva speaks during a conference hosted by the Vatican on economic solidarity, at the Vatican on Feb. 5, 2020. (Remo Casilli/Reuters)
Inflation

With inflation climbing to multi-decade highs and price pressures broadening out, the International Monetary Fund (IMF) has warned that there’s now a “substantial risk” that high inflation becomes a more permanent fixture and that expectations around future rates of inflation could become unmoored and drive a wage-price spiral.

A team of IMF economists said in a recent blog post that central banks in the world’s major economies have, for the most part, been caught by surprise by the intensity and persistence of the current inflationary wave.

“Inflation seemed to be driven by an unusual mix of supply shocks associated with the pandemic and later Russia’s invasion of Ukraine, and it was expected to decline rapidly once these pressures eased,” the economists wrote.

Initially, inflation was more narrowly confined to goods as pandemic lockdowns led people to focus their spending on things like home renovations.

Over time, however, price pressures have broadened out, seeping into a wider array of categories and sticking around for longer.

This, in turn, has led central banks to realize they need to “move more urgently to avoid an unmooring of inflation expectations and damaging their credibility,” the IMF team argued.

Seeking to quell inflationary pressures, the Federal Reserve and other major central banks have embarked on a path of tightening monetary settings. But as evidence builds of economic slowdowns—or outright recessions—in a number of the world’s economies, there’s growing market speculation that central banks will hit pause on further tightenings—or pivot and resume accommodative policies.

A pivot would be a mistake, the IMF team warns, urging central banks to remain “resolute” and keep tightening until inflation drops—along with future expectations—in order to avert “potentially more painful and disruptive adjustments later.”

The IMF economists believe that the monetary and fiscal tightening should cool demand in goods, while slowing economic growth will take the sting out of price pressures in services. Still, they warn that there remains “substantial uncertainty” about the inflationary outlook.

“Inflation risks appear strongly tilted to the upside. There is a substantial risk that high inflation becomes entrenched, and inflation expectations de-anchor,” they said.

Part of what’s driving this view is that inflation in the services sector—from personal services to housing rents—seems to be accelerating and, according to the IMF, is unlikely to fall quickly.

There’s also the risk of a wage-price spiral unfolding, where expectations around higher rates of inflation stick around for longer, leading workers to demand higher wages to offset the cost-of-living crunch.

“In countries with strong labor markets, nominal wages could start rising rapidly, faster than what firms reasonably could absorb, with the associated increase in unit labor costs passed into prices,” the IMF team wrote.

The IMF team argued that these “second round effects” would lead to “more persistent inflation and rising inflation expectations.”

Another risk is that geopolitical tensions could also intensify, reigniting another round of energy price inflation.

If upside risks to inflation materialize, central banks will have to act more aggressively to cool the economy, leading to unemployment rising “significantly,” the IMF team said, while warning of potential financial chaos.

“The tightening in financial conditions may well be disorderly, testing the resilience of the financial system and putting especially large strains on emerging markets,” the economists said.

While public support for tighter monetary policy is currently high, this could change if unemployment rises and people experience economic hardship.

But even if public support for further tightening shifts, the IMF argues that restoring price stability is crucial and central banks shouldn’t blink.

“A key lesson of the high inflation in the 1960s and 1970s was that moving too slowly to restrain it entails a much more costly subsequent tightening to re-anchor inflation expectations and restore policy credibility,” the economists said, warning that the road ahead for central bankers will be “difficult.”

The IMF’s warning came after the Fed delivered another 75 basis point hike at the end of July and not long before Britain’s central bank hiked interest rates by 50 basis points—the biggest amount in 27 years—in a bid to cool price pressures.

Andrew Bailey, chief of the Bank of England (BOE), told BBC Radio 4’s Today program on Aug. 5 that workers shouldn’t ask for inflation-matching pay rises, echoing the IMF’s view that there’s a risk of a wage-price spiral unfolding and warning that inflation could get “embedded.”

“If everybody tries to beat inflation—and that is in both price-setting and wage-setting—it doesn’t come down, it gets worse,” Bailey said.

“My key point is, if inflation becomes embedded and persistent, it gets worse. And the effects get worse,” he added.

Bailey earlier warned that inflation in Great Britain would climb to over 13 percent in October and that the UK economy is heading into a long recession.

The U.S. economy has already fallen into a recession, according to the common—but not official—rule of two back-to-back quarters of negative gross domestic product (GDP).

The Biden administration, along with a number of economists, have challenged the view that the U.S. economy is in a recession, arguing that the evidence isn’t conclusive, in particular data showing that the labor market remains tight and unemployment low.

There are signs, however, that the U.S. labor market is cooling. Initial jobless claims rose again last week, and the number of job openings has fallen significantly.

Markets expect that the Fed will keep tightening to a target federal funds rate of around 340 basis points before pivoting and beginning to gradually lower rates in mid-2023, according to the Federal Reserve Bank of Atlanta’s market probability tracker.