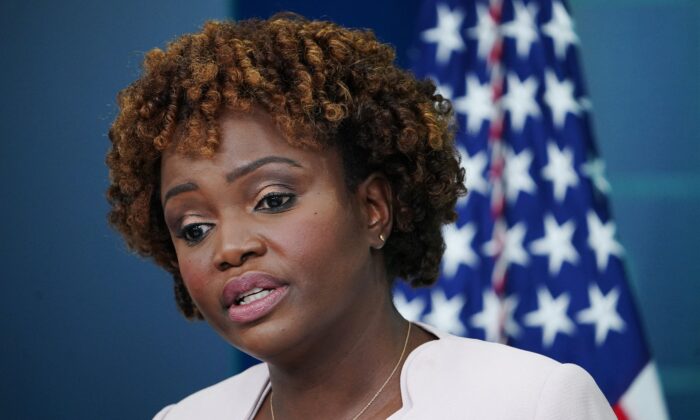 The White House said Friday that President Joe Biden’s student loan debt forgiveness program would cost taxpayers $24 billion per year but that it considers it “fully paid for” because it’s offset by the administration’s deficit reduction.

White House Press Secretary Karine Jean-Pierre disclosed the Biden administration’s cost estimate for the debt wipeout program in an Aug. 26 statement, which came days after several independent estimates put the figure at between $33 billion and $50 billion per year.

The figure provided by Jean-Pierre means that, over a ten-year period, the forgiveness scheme will cost the government $240 billion in lost revenue.

But White House officials have said they consider the program completely paid for as the administration is on track for $1.7 trillion in deficit reduction and, rather than requiring new outlays by taxpayers, the $240 billion in lost revenue would just cut the deficit reduction figure to around $1.5 trillion.

“Practically speaking, compared to the previous year, 1.7 trillion more dollars are coming into the Treasury than are going out,” Bharat Ramamurti, the deputy director of the National Economic Council, said at an Aug. 26 briefing at the White House.

“And we’re using a portion of that—a very small portion of it—to provide relief to middle-class families, consistent with the President’s plan. So, yes, we consider it fully paid for,” he said.

The $240 billion cash-flow impact projection is based on the assumption that 75 percent of eligible participants take part in the program, the White House said in an Aug. 26 analysis.

The Biden administration expects this estimate to “necessarily change” in line with the actual take-up rate and as new data comes in from the Department of Education, on which the assessment is based.

The White House analysis also says that the $240 billion estimate doesn’t include the positive cash-flow effects of student loan borrowers returning to repayment in January 2023 after what will have been a 33-month interest-free pause on payments.

The freeze on student loan payments began in March 2020 under then President Donald Trump in a bid to provide relief to debtors at the height of the pandemic. The pause has been renewed several times since.

Economists at the Penn Wharton Budget Model estimated that Biden’s debt relief plan is projected to cost taxpayers around $300 billion if it’s a one-time forgiveness, and $330 if the program runs for a decade.

A separate calculation from the Committee for a Responsible Federal Budget said it would cost more, between $440 billion and $600 billion over the next 10 years, with a central estimate of around $500 billion.

Under Biden’s sweeping forgiveness plan, taxpayers will absorb up to $10,000 in outstanding student debt for individual borrowers earning less than $125,000 per year or $250,000 for married joint filers.

Republicans have panned the debt wipeout scheme as unfair to people who sacrificed to pay off their student loans or never racked them up in the first place but now have to foot the bill for other people’s debts.

“President Biden’s student loan socialism is a slap in the face to every family who sacrificed to save for college, every graduate who paid their debt, and every American who chose a certain career path or volunteered to serve in our Armed Forces in order to avoid taking on debt,” Senate Minority Leader Mitch McConnell (R-Ky.) said in a Wednesday statement.

Biden has said his plan will give working and middle-class families “breathing room” as they look to resume federal student loan payments.