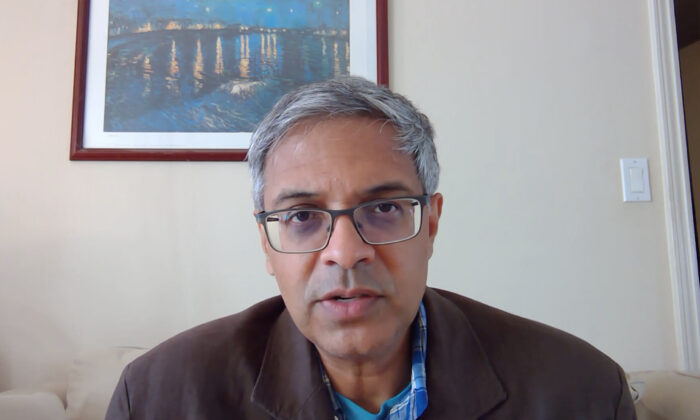 Earlier this month, individuals at Stanford University attempted to link professor Dr. Jay Bhattacharya to COVID-19 death counts in Florida because of his comments on the efficacy of masks on children.

Bhattacharya told The Epoch Times in a Sept. 21 interview that Stanford University hasn’t taken any action in support of or against him in response.

“Governor DeSantis had tweeted a picture of me with a quote that was said during one of these policy roundtables. I said that vaccinating the old protects the vulnerable,” said Bhattacharya, professor of medicine at Stanford University.

“We have protected the vulnerable by vaccinating the older population.” – Dr. Jay Bhattacharya, Professor of Medicine at Stanford University pic.twitter.com/M83erwn0js

In early September, some posters with Bhattacharya’s portrait were anonymously posted around campus.

“The poster had a picture of me, a big picture of me, and circled Governor DeSantis’s name, circled me, and then put up next to it a graph of Florida death rates from COVID,” he said.

Bhattacharya said he notified campus police and his department chair of the posters, but no action was taken. It’s currently unknown who organized the effort or put up the posters around campus.

Around the same time, Stanford’s epidemiology department chair, Dr. Melissa Bondy, circulated a petition saying that “several Stanford faculty members have publicly advocated for policies for others that are contrary to those the university has adopted,” and that “these recommendations are disturbing and contrary to public health standards; they foster uncertainty and anxiety and put lives at risk.”

The Federalist reported that the petition asked the university president “to clarify for the faculty the limits of public pronouncements when proclaiming on public health policy.”

While the petition did not directly name Bhattacharya, it did include a quote from one of the Florida roundtables on child masking, during which the professor said, “there are no high-quality randomized studies evaluating masks on children.”

Stanford has not taken any action in response to the petition.

Bhattacharya said he believes disagreements in academia should be addressed through conversations, debates, and written op-eds to build discussions and knowledge.

“I don’t believe intimidation campaigns have any place in scientific discussion. I’m going to continue to speak up,” he said.

The Stanford School of Medicine told The Epoch Times in an emailed statement: “Stanford Medicine supports the freedom of faculty to voice their position, including opposing views. We do not endorse any ​individual views expressed by faculty, and their views do not represent an institutional position by Stanford Medicine.”

According to the Florida Health Department, the state saw a spike in COVID-19 related deaths in late July through August, with the majority of deaths resulting among the senior population (age 65 and older).

Some elected officials and other researchers have attributed the death rates to the state’s lack of a mask mandate; however, Bhattacharya says Florida’s high death rates are due to state’s large senior population in relation to its overall population.

“Age is the single most important risk factor in determining COVID deaths. An area, region, state, or country that has an older population will just, based on that fact alone and nothing that they’ve done, have higher death rates from COVID,” said Bhattacharya.

Dr. Martin Kulldorff, Harvard University professor and co-author of the article in The Federalist, also said that data reports should adjust for age when comparing COVID-19 mortality rates across different states. Kulldorff posted a graph on Twitter showing Florida with a lower age-adjusted COVID-19 mortality per 100,000 people compared to many other states.

According to the U.S. Census Bureau, Florida ranks second in terms of the largest senior population (20.9 percent) in relation to the state’s overall population. Maine ranks first with 21.2 percent of its population over the age of 65.

Bhattacharya also stated that existing research on masks on children lacks randomized trials, which he says are necessary in scientific research for developing concrete evidence and determining the effects of interventions.

“The evidence for masks are these mechanistic studies, where they put the masks on mannequins and there’s droplets. But, the disease, at least the hypothesis is that it also spreads by aerosol. Masks, unless worn very tightly fit…it’s very difficult to stop the spread,” Bhattacharya said. “It’s a situation where there’s a lot of uncertainty because of the data.”

He referred to the World Health Organization’s (WHO) position that children under 5 shouldn’t be required to wear masks, which differs from the Centers for Disease Control and Prevention’s (CDC) recommendation for universal indoor masking for everyone age 2 and older.