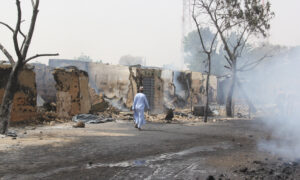 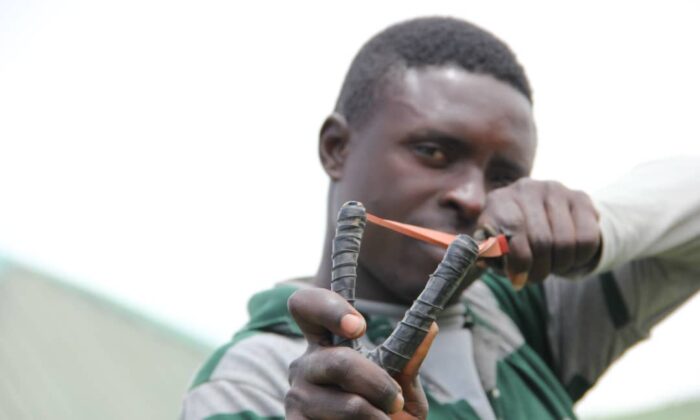 A member of a civilian watch group shows the slingshot he used to oppose terrorists in Rirom County of Plateau State in Nigeria on Aug. 2, 2021. (Masara Kim/The Epoch Times)
Africa

Civilians armed with slingshots and homemade shotguns in Nigeria’s north are scrambling to fend off assault rifle-toting terrorists, according to a leader of a group that battled the attackers on the night of July 31.

“We laid in the grass firing stones with our slingshots and firing the few Dane guns [shotguns] in our possession to scare the attackers,” according to a civilian watch leader, who declined to give his name.

“The locally made ones [guns] fire only pellets not bullets. The shots don’t go more than 50 meters and can’t be automatic, unlike the AK47/9 [used by the terrorists] which can fire up to 3 rounds/sec and a distance of 300-400m,” Gabriel Ad’Ofikwu, a retired major in the Nigerian army, said in a text message. “They are by far inefficient to repel the attackers.”

Despite their weak firepower, the vigilantes were unyielding during the invasion, blocking the terrorists for long enough that women and children could evacuate, the young citizen watch leader told The Epoch Times.

Beginning July 31 at around 7 p.m., an estimated 500 terrorists armed with assault rifles descended on 15 villages in Bassa County of Plateau state, home of the 3rd Division of the Nigerian army.

The combined death count as of Aug. 3 was 68, according to numbers obtained by The Epoch Times from Enos Hospital in Miango, as aid workers search homes and the local brush for more bodies. The marauders looted food stores and burned the houses and vehicles of civilians, even as the military looked away, according to a tribal leader who spoke to The Epoch Times.

The attack appears to be the latest in a sectarian campaign waged by the Muslim Fulani ethnic group against predominately Christian farmers in Nigeria.

Several hours before the brutal assault, a military unit was in the village of Jebbu, which was nearly surrounded by terrorists, yet the military left the area in the afternoon for unknown reasons. Jebbu is 13 miles west of Jos, the Plateau state capital.

“The army and police were in the area when threats started [on July 31],” said Mallison Davidson, spokesperson of the Irigwe Tribal association, “but they withdrew before the real violence started hours later.”

“In the morning, we had security threats from our attackers—Fulani herdsmen—who attempted to invade these villages but with the help of the security agents, they were curtailed. But around 7 p.m., they went back and reinforced and remobilized, came here in their numbers.

“They started setting these houses ablaze from Zanwhra down to Kpatenvie in Jebbu Miango [District].  They set over 250 houses ablaze—that’s an estimate. They destroyed several farmlands. They carted away domestic animals and household items,” Mallison said.

On Aug. 1, women and girls were seen trooping out on foot carrying small bags of clothes, while boys and men guarded the still-smoking houses with shotguns, clubs, and slingshots.

The terrorists struggled for hours to get closer to residences until men in military uniform reportedly assisted them to break the resistance, according to an eyewitness. Seven civilians, chiefly members of the civilian volunteers, were killed after the military arrived at the scene.

The army has claimed the latest incident was a communal clash, which it averted.

“Troops of Operation Safe Haven (OPSH) deployed to maintain peace and security in Plateau state and environs has thwarted what would have been a deadly clash between the Irigwe youths and Fulani herders at Rafin Bauna and Ijebu Miango community in Bassa local government area of Plateau state,” according to a statement released by an Army spokesperson, Maj. Ishaku Takwa, on Aug.1.

“On 31/07/2021, the Command received a report that there was a conflict between gunmen suspected to be Fulani Militia and youth from Irigwe at Jebbu Miango, Bassa LGA of Plateau State. Unfortunately, fifty houses were torched, and four natives were also shot dead. Upon receipt of the report, the tactical team of the Command were immediately deployed to the scene to tighten the security of the area and to restore peace,” Assistant Superintendent of Police Gabriel Uba, the spokesperson of the Plateau State Police Command, wrote in a text message.

However, 10 more villages were destroyed in the area, with the attacks spreading to neighboring Riyom County, less than three hours after the two statements circulated.

The officials’ statements are an attempt to cover their crimes, says human rights lawyer Solomon Dalyop.

“I am happy the military is admitting that they were there, yet scores of people were killed, hundreds of houses were razed, and crop farms were mowed down. All these losses were recorded on the side of the farming natives of Bassa and not one on the side of the Fulani, who left their settlements to come and attack in their hundreds, yet no arrest was made.

“The military has confirmed our fears that they have a hand in this, particularly as they have gone ahead to arrest the natives who were protecting their houses, while more killings and destruction continued for three days,” Dalyop told The Epoch Times.