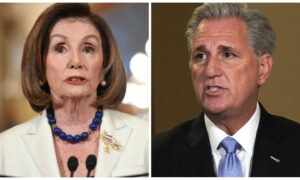 Sen. Kelly Loeffler (R-Ga.) said she will introduce a resolution condemning House Speaker Nancy Pelosi (D-Calif.) for “politicizing the 25th Amendment” after the California Democrat last week announced a bill to create a “Commission on President Capacity” to determine whether the 25th Amendment would be needed.

Pelosi, who has repeatedly questioned Trump’s fitness in office after he was diagnosed with the CCP virus, claimed the legislation was not about Trump.  Republicans and Trump also said she is trying to politicize the amendment with just weeks to go before the Nov. 3 election.

“This is not about President Trump. He will face the judgment of the voters, but he shows the need for us to create a process for future presidents,” Pelosi told reporters on Oct. 9.

“Clearly, he is under medication,” Pelosi later said of Trump in the news conference, adding that “clearly he is in an altered state.” She also dismissed claims that she was trying to call into question Trump’s fitness for the office.

Loeffler, in a statement, asserted that the bill is merely a power grab by Democrats.

“Today’s announcement by Speaker Pelosi is just her latest scheme to attack President Donald J. Trump. From the day President Trump was sworn in, Nancy Pelosi has tried to overturn the results of the 2016 election,” she said. The resolution is nonbinding.

“From the Russia collusion hoax to the sham impeachment and now the 25th Amendment farce, Nancy Pelosi has disgraced the office of Speaker in a desperate attempt to rig the system and seize power. If she is still serious about holding office, she should put a mask on, hit the salon and respect the election results when Donald Trump is re-elected for four more years,” Loeffler said.

Their proposal has no chance of being enacted, as Congress is on recess and the Senate and White House are currently controlled by the GOP. Republicans and Trump have already dismissed it as a political distraction.

“Let’s assume the Democrats are going to vote for sleepy Joe, which is ridiculous because Joe shouldn’t be a candidate, Joe’s in no condition to be a candidate. … the 25th Amendment that crazy Nancy is playing around with—she’s gone crazy, she’s a nut job—but this 25th Amendment, I think they put it in so they can get Kamala in,” Trump said, referring to Biden’s running mate, Sen. Kamala Harris (D-Calif.), on Rush Limbaugh’s radio show on Oct. 9.