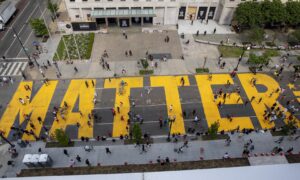 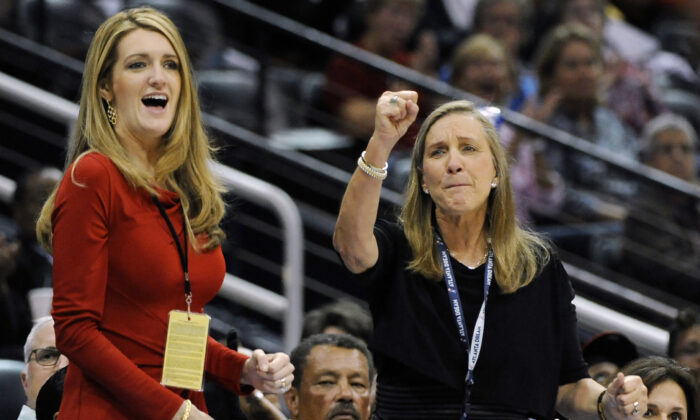 Mary Brock (R) and Kelly Loeffler cheer from their courtside seats as the Atlanta Dream basketball team plays in the second half of their WNBA basketball game, in Atlanta on Sept. 6, 2011. (David Tulis/AP Photo)
Politics

“I was incredibly disappointed to read about efforts to insert a political platform into the league,” Sen. Kelly Loeffler (R-Ga.) wrote in a letter to Cathy Engelbert, the commissioner of the Women’s National Basketball Association (WNBA).

“The lives of each and every African American matter, and there’s no debating the fact that there is no place for racism in our country,” she said. “However, I adamantly oppose the Black Lives Matter political movement, which has advocated for the defunding of police, called for the removal of Jesus from churches and the disruption of the nuclear family structure, harbored anti-Semitic views, and promoted violence and destruction across the country.”

The political movement isn’t aligned with the values and goals of the league and the team she co-owns, Loeffler said.

The letter was obtained by The Epoch Times; it is included in full at the bottom of the article.

Loeffler, who shared about the letter on social media, said the league should stand for and unite around the American flag, “not divisive political movements like BLM that unapologetically seek to defund the police.”

Black Lives Matter, which was started in 2013, is campaigning to defund police departments across the United States.

The group also says on its website: “We disrupt the Western-prescribed nuclear family structure requirement by supporting each other as extended families and ‘villages’ that collectively care for one another.”

Supporters of the movement also have called for toppling Jesus statues and removing his likeness from churches. Houses of worship have been damaged during protests and riots in recent weeks, some of which are linked to Black Lives Matter.

Reaction around the women’s league was harsh, with many condemning Loeffler’s comments.

Layshia Clarendon, who played for the Dream from 2016 to 2018, said she can’t believe she ever visited Loeffler’s house and shared a meal with her.

“It’s actually really hurtful to see her true colors. I had no idea while I played for ATL she felt this way. Happy to own us as long as we stay quiet and perform,” Clarendon wrote in a social media post.

Renee Montgomery, a WNBA player who isn’t playing this year so she can dedicate time to so-called social justice reform, told Loeffler: “I’m pretty sad to see that my team ownership is not supportive of the movement & all that it stands for.

“I was already sitting out this season & this is an example of why. I would love to have a conversation with you about the matter if you’re down?” she wrote on Twitter.

The Women’s National Basketball Players Association (WNBPA) says Loeffler should be removed from the league.

Engelbert, the league’s commissioner, said in a statement late July 7 that the league is based on the principle of equal and fair treatment of all people.

Loeffler, she said, hasn’t served as a governor of the Dream since last year and isn’t involved in the team’s daily business.

Loeffler’s letter came a day after the league and its players’ association announced the season would begin in late July with a weekend of games centered around the Black Lives Matter movement.

Teams will wear special uniforms featuring the names of people killed in instances of confirmed or alleged police brutality, including Sandra Bland and Breonna Taylor.

Throughout the season, players will wear warm-up shirts that say “Black Lives Matter” on the front. The back of the shirts will state: “Say Her Name.”

“Black Lives Matter” will also be prominently displayed on courts during games.

“We are incredibly proud of WNBA players who continue to lead with their inspiring voices and effective actions in the league’s dedicated fight against systemic racism and violence,” Engelbert said in a statement.

The league also announced the creation of a social justice council and a new platform called The Justice Movement.

“The mission of the Social Justice Council is to be a driving force of necessary and continuing conversations about race, voting rights, LGBTQ+ advocacy, and gun control amongst other important societal issues,” the WNBA and WNBPA said in a joint statement.

When I purchased a stake in the Atlanta Dream nearly a decade ago, it really was a dream come true for me. Sports are such a powerful, dynamic force in uniting communities across our great country. People from all walks of life are unified by a team, a game, a championship. Everyone wears the same uniform – even when they don’t share the same political views.

I appreciate your hard work as the WNBA Commissioner, especially during these challenging moments, but I was incredibly disappointed to read about efforts to insert a political platform into the league. Players, coaches, and yes – team owners – share differing opinions on many issues. All of us have a constitutional right to hold and to express our views. But to subscribe to a particular political agenda undermines the potential of the sport and sends a message of exclusion.

The truth is, we need less—not more politics in sports. In a time when polarizing politics is as divisive as ever, sports has the power to be a unifying antidote. And now more than ever, we should be united in our goal to remove politics from sports.

The lives of each and every African American matter, and there’s no debating the fact that there is no place for racism in our country. However, I adamantly oppose the Black Lives Matter political movement, which has advocated for the defunding of police, called for the removal of Jesus from churches and the disruption of the nuclear family structure, harbored anti-Semitic views, and promoted violence and destruction across the country. I believe it is totally misaligned with the values and goals of the WNBA and the Atlanta Dream, where we support tolerance and inclusion.

Amid the recent unrest in many American cities, this movement advocated the creation of lawless autonomous zones in places like Atlanta. I denounced these zones of violence—for which I have been criticized. However, this same group fell silent over the fourth of July weekend when an 8-year-old girl was murdered under the “mob rule” that I warned about days earlier. This is not a political movement that the league should be embracing, and I emphatically oppose it.

Though I was not consulted about—nor do I agree with the League’s decision in this matter, I am proposing a common-sense recommendation to ensure we reflect the values of freedom and equality for all. I believe we should put an American flag on every jersey. Include it in our licensed apparel for players, coaches and fans.

As our nation battles COVID-19, economic hardship, and the fight to ensure justice for all, we need a unifying rallying point for the American people. I sincerely hope you will consider my proposal. Because if we can’t acknowledge, much less unite behind our flag during this struggle, we’ll never achieve the goals we all want for each other.

Our flag has weathered countless storms, wars, and civil unrest. It symbolizes the strengths unique to our country and the American people. It stands for freedom, equality and hope. This important symbol will unite us as we work toward a better, brighter, and more equitable tomorrow.

Thank you in advance for your consideration in this important matter. I look forward to your prompt response.