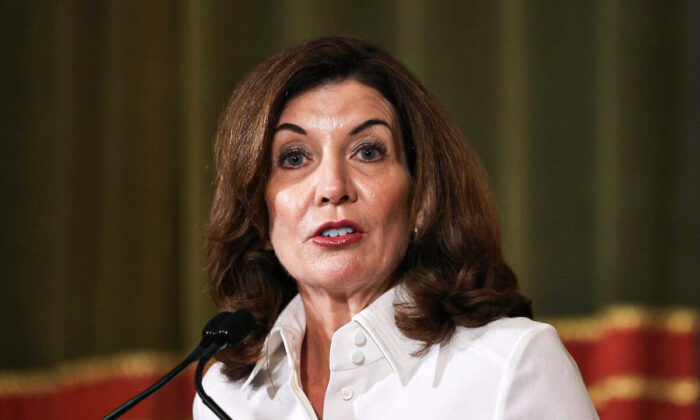 Gun Owners of America (GOA) is suing New York state over new restrictions on the public carrying of firearms that were rushed through the state Legislature and signed into law after the U.S. Supreme Court struck down the state’s requirement that a carry permit applicant must demonstrate a special need for self-defense.

At the time, Hochul denounced the court for issuing what she called “a reckless decision removing century-old limitations on who is allowed to carry concealed weapons in our state—senselessly sending us backward and putting the safety of our residents in jeopardy.”

The name of the statute itself is ironic because it is “New York’s attempt to flout the Supreme Court’s” June 23 ruling in New York State Rifle and Pistol Association v. Bruen, according to the legal complaint (pdf) filed July 11 in U.S. District Court for the Northern District of New York. The new law puts into effect “several blatantly unconstitutional new infringements of the enumerated right to keep and bear arms,” the complaint states.

“We are confident that we will pretty much overturn everything they did in this legislative package because they were clearly in violation of the direct ruling in New York State Rifle and Pistol Association v. Bruen,” Sam Paredes, the executive director of Gun Owners of California, a member of GOA’s board of directors, and treasurer of its affiliated foundation, told The Epoch Times in an interview.

Specifically, the lawsuit targets the CCIA’s “good moral character” requirement for permit applicants, the requirement that applicants supply character references at in-person interviews with police and submit their own social media posts for government inspection, the vastly expanded ban on sensitive locations where concealed weapons may not be brought, and a raft of new administrative fees the lawsuit calls a “Second Amendment tax.”

“Applicants must undergo 18 hours of combined training where presently it’s only four hours. The fact of the matter is that we know that this is just an angry, vicious response to the Supreme Court ruling because concealed carry weapons permit holders in New York are amongst the most law-abiding of all citizens in the state, just like they are in California and across the country,” Paredes said.

The four-hour training requirement and background checks were “sufficient to maintain that level of purity amongst the CCW [i.e. concealed carry weapons permit] holders,” but the new mandates serve no purpose other than to limit gun ownership, he said.

“So, they have added this great amount of subjectivity to the process,” he said. “Subjectivity is the enemy of the Second Amendment, and they are adding it in spades.”

In a statewide memo to law enforcement, Bonta encouraged permit-issuing authorities to include the “absence of hatred and racism” as a positive factor in determining whether to grant a permit, leading to concerns among Second Amendment advocates that an applicant’s political views, expressed on social media or elsewhere, could lead to a permit denial.

Although Paredes said as far as he knows the CCIA doesn’t specifically reference “hatred” or “racism,” these potentially inflammatory terms, which are malleable in today’s politically polarized environment, could still somehow find their way into the New York permitting process.

The Epoch Times reached out to state officials.

“We are not commenting,” the New York State Police replied by email.