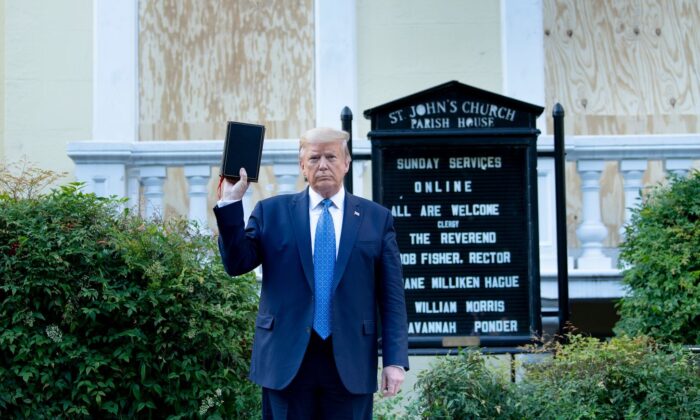 President Donald Trump holds a Bible while visiting St. John's Church across from the White House in Washington on June 1, 2020. (Brendan Smialowski/AFP via Getty Images)
US News

Sen. Marco Rubio (R-Fla.) said that “professional agitators” were cleared by police before President Donald Trump’s visit to the St. John’s Episcopal Church near the White House amid protests about the death of George Floyd.

“They knew the street needed to be cleared before 7 pm curfew,” Rubio wrote on Twitter. “But they deliberately stayed to trigger police action & get the story they wanted, that ‘police attacked peaceful protesters.’”

Trump faced criticism for having his photo taken while he held a Bible in front of the church. Both Senate Minority Leader Chuck Schumer (D-N.Y.) and House Speaker Nancy Pelosi (D-Calif.) criticized the move.

“Across our country, Americans are protesting for an end to the pattern of racial injustice and brutality we saw most recently in the murder of George Floyd,” their joint statement reads. “Yet, at a time when our country cries out for unification, this President is ripping it apart. Tear-gassing peaceful protestors without provocation just so that the President could pose for photos outside a church dishonors every value that faith teaches us.”

The church was damaged by fire earlier in the week during unrest and rioting in the wake of Floyd’s death while he was in the custody of the Minneapolis police. Former officer Derek Chauvin was charged with third-degree murder.

“Incredibly powerful moment as @realDonaldTrump walked to St. John’s Church, where every past president since Madison has prayed for the wellbeing of our country. We must come together as a country, and I thank @POTUS for leading the effort to protect law and order,” wrote Rep. Doug Lamborn (R-Colo.).

The walk to the church Trump made “through the burned-out and graffiti-covered Lafayette Park,” Rep. Bill Johnson (R-Ohio) said, “was a powerful reminder that Americans will not be intimidated by lawlessness and violence.”

Reports had said that U.S. Park Police and National Guard troops removed the protesters from the area.

The death toll from the nationwide unrest rose to at least nine, including two people killed in a Chicago suburb. The police chief in Louisville, Kentucky, was fired after a restaurant owner was killed by police and National Guard members enforcing a curfew.