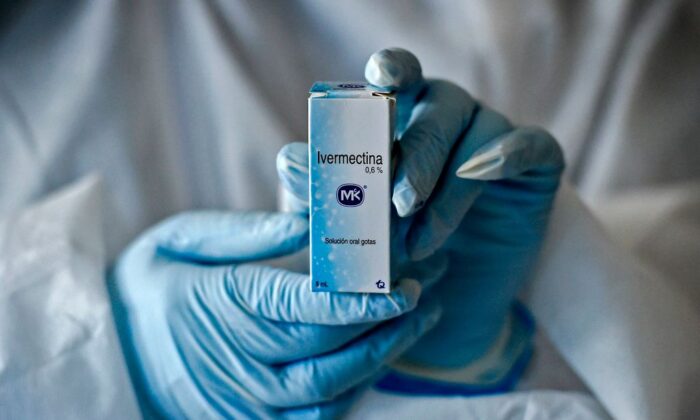 A health worker shows a box containing a bottle of Ivermectin, a medicine authorized by the National Institute for Food and Drug Surveillance to treat patients with mild, asymptomatic or suspicious COVID-19, as part of a study of the Center for Paediatric Infectious Diseases Studies, in Cali, Colombia, on July 21, 2020. (Photo by Luis ROBAYO / AFP) (Photo by LUIS ROBAYO/AFP via Getty Images)
Regional News

A hospital system in Oklahoma responded to a Rolling Stone article that claimed hospital emergency rooms in Oklahoma were turning away gunshot victims due to ivermectin overdose patients, saying that it has not treated patients due to complications from taking the drug.

Rolling Stone on Sunday issued an update to its article, which included the statement from a local hospital denying the claims.

The report sourced a local KFOR article that itself cited Oklahoma ER doctor Dr. Jason McElyea who claimed that people overdosing on farm-grade ivermectin are causing emergency rooms to be “so backed up that gunshot victims were having hard times getting” inside emergency rooms. The reports did not mention where McElyea had worked, but later, HS Sequoyah, located in Sallisaw, issued a statement that McElyea had worked there and refuted his claims.

“Although Dr. Jason McElyea is not an employee of NHS Sequoyah, he is affiliated with a medical staffing group that provides coverage for our emergency room,” the statement, on NHS Sequoyah’s website as of Sunday afternoon, reads. “With that said, Dr. McElyea has not worked at our Sallisaw location in over 2 months. NHS Sequoyah has not treated any patients due to complications related to taking ivermectin. This includes not treating any patients for ivermectin overdose.”

It continued: “All patients who have visited our emergency room have received medical attention as appropriate. Our hospital has not had to turn away any patients seeking emergency care. We want to reassure our community that our staff is working hard to provide quality healthcare to all patients. We appreciate the opportunity to clarify this issue and as always, we value our community’s support.”

Scott Schaeffer, managing director of the Oklahoma Center for Poison and Drug Information, told the Daily News that “since the beginning of May, we’ve received reports of 11 people being exposed to ivermectin,” suggesting that there is no influx of ivermectin overdoses in state hospitals.

Schaeffer noted that most had “relatively minor symptoms such as nausea, vomiting, diarrhea, and dizziness,” although he cautioned that there are more serious side effects associated with the drug.

The Food and Drug Administration has long approved the use of the ivermectin in people for parasites and skin conditions, although it has recently issued warnings against people taking animal versions of the drug. Ivermectin has not been approved by the FDA to treat COVID-19, a disease caused by the CCP (Chinese Communist Party) virus.

Controversy erupted around its usage for COVID-19 after podcaster Joe Rogan said he took ivermectin along with a cocktail of other drugs after he was diagnosed with the disease last week. In a social media post on Sept. 3, Rogan said he tested negative for the virus after testing positive four days prior.

The Epoch Times has contacted NHS Sequoyah for additional comment.