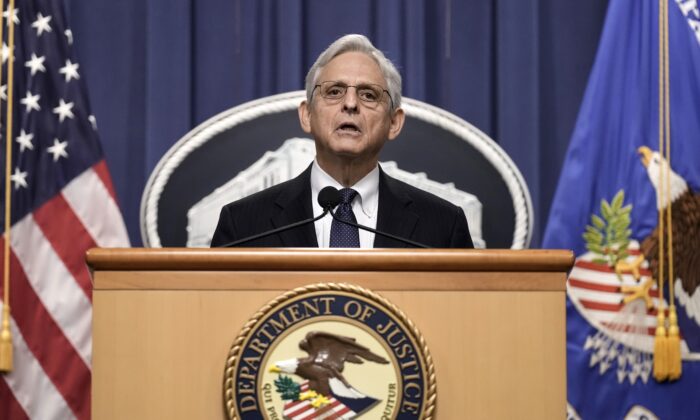 Senate Republicans are warning Attorney General Merrick Garland not to target Americans who speak against transgender surgeries on children the way his department did to parents protesting at school board meetings.

In a letter sent on Tuesday to Garland, a group of five senators said they remain concerned that he would repeat a pattern played out in his previous handling of unruly school board protesters.

“In your confirmation hearing before the Senate Judiciary Committee, you promised that, under your watch, the Department of Justice would not be politicized or weaponized,” wrote Sens. Ted Cruz (R-Texas), Mike Lee (R-Utah), Ron Johnson (R-Wis.), Roger Marshall (R-Kan.) and Marsha Blackburn (R-Tenn.). “You have already broken that promise more than once, and we are concerned you are poised to do so once again.”

In October 2021, Garland issued a memo bringing together a coalition of federal and local law enforcement to address alleged “threats of violence” against teachers and school board members. In response to that memo, the FBI’s counterterrorism unit created the threat tag “EDUOFFICIALS,” and opened dozens of investigations into the activities of protesting parents.

According to Garland, the memo was based in part on a letter sent to President Joe Biden by the National School Boards Association (NSBA), which characterized disruptions at school board meetings as “a form of domestic terrorism and hate crime.” Specifically, the NSBA urged the federal government to invoke counterterrorism laws to quell “angry mobs” of parents, who sought to hold school officials accountable for race and sex indoctrination, and for imposing harsh COVID-19 restrictions on their children.

The senators said they had to remind Garland of his promise, because the DOJ has once again been asked to censor debate, this time, over the issue of children being put through irreversible transgender procedures.

On Oct. 3, the American Academy of Pediatrics, American Medical Association, and Children’s Hospital Association sent a letter (pdf) to Garland, asking the DOJ to help with alleged “threats” and “harassment” they face because of the “gender-affirming healthcare” they provide.

“From Boston to Akron, [Ohio], to Nashville, [Tennessee], to Seattle, children’s hospitals, academic health systems, and physicians are being targeted and threatened for providing evidence-based healthcare,” the organizations wrote in language similar to that of the NSBA letter. “These attacks have not only made it difficult and dangerous for institutions and practices to provide this care, [but] they have also disrupted many other services to families seeking care.”

“Our organizations have called on technology companies to do more to prevent this practice on digital platforms, and we now urge your office to take swift action to investigate and prosecute all organizations, individuals, and entities responsible,” the letter read.

The reason that the DOJ continues to get such requests is because Garland’s response to the NSBA letter set a very bad precedent, the senators argued.

“Your actions in regard to the NSBA letter sent an inappropriate message that federal law enforcement can and will be used to aid one side of a political debate, and to either silence or chill the speech of the other,” they told Garland. “Now, in a remarkably similar fashion, medical associations have written to you asking you to again treat any speech critical of their position on a sensitive matter of public policy as a physical threat warranting a law enforcement response.”

“We call upon you to reaffirm that you will faithfully protect the First Amendment rights of all Americans to peacefully debate this and all other policy questions, irrespective of viewpoint,” the senators continued. “The weaponization of federal law enforcement agencies like the DOJ, in order to produce preferred policy outcomes, cannot continue—our democracy depends on it.”

The American Academy of Pediatrics, a national organization of pediatric health professionals, in its latest guidelines encourages providers to adopt a “gender-affirmative care model” and offer services that are “oriented toward understanding and appreciating the youth’s gender experience.”

In such a model, transgender identities and “diverse gender expressions” aren’t considered to be mental disorders but “normal aspects of human diversity.” The model also recognizes gender identity as something that “evolves as an interplay of biology, development, socialization, and culture.”

Meanwhile, many health professionals who hold a different view of best standard of care for those with gender dysphoria have been pushed out of their profession, like sex researcher Dr. Kenneth Zucker.