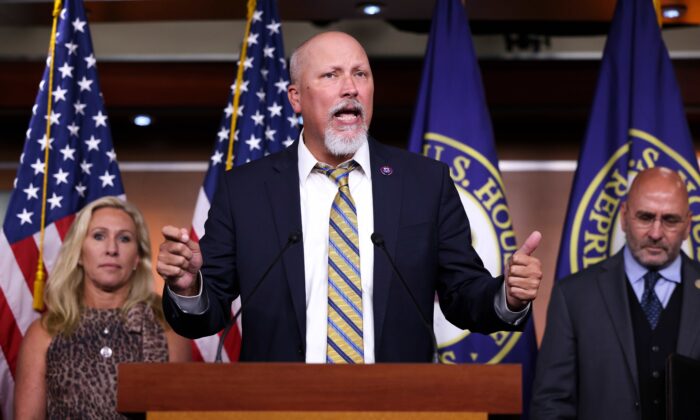 A group of Republican lawmakers led by Rep. Chip Roy (R-Texas) unveiled a bill on Feb. 8 that would reinstate troops fired for not complying with the military’s COVID-19 vaccine mandate.

The Service Restoration Act (pdf) would “ensure that American servicemen and women in uniform are not fired for refusing to take the COVID-19 vaccine and that those already fired can return to military service,” a release from the Republican’s office said.

Roy’s office noted that hundreds of “battle-ready service members” have been separated from the Armed Forces as a result of the mandate, which was announced by Defense Secretary Lloyd Austin in August 2021.

“Worse, the Department of Defense (DOD) has denied many medical and religious exemptions, which has resulted in forcing service members to choose either their faith or livelihoods,” it said.

“Because of President [Joe] Biden’s power-hungry, anti-science COVID-19 vaccine mandate, hundreds of valuable American service members are being forced out of our military, taking with them years of subject-matter expertise, careers of selfless sacrifice, and lifelong dreams of military service. This is strategically foolish, profoundly unamerican, and completely unacceptable,” Roy said in a statement on the legislation.

The lawmaker added, “I introduced the Service Restoration Act to ensure that the brave men and women of our armed forces are not fired over this wrong-headed mandate—whether it be for a medical, religious, conscientious or any reason—and that those already dismissed are able to get back to honorably serving their country with their time of service and their records rightfully restored.”

The measure came as the Air Force on Tuesday became the second U.S. military branch to approve religious exemptions to the mandatory COVID-19 vaccine, although the nine approved so far represent just a fraction of the more than 6,400 requested by Air Force troops.

The Marine Corps is the only other military service to grant any religious accommodations, allowing three so far. On Jan. 13, it granted religious exemptions to the military’s COVID-19 vaccine mandate, nearly two months after the vaccination deadline for active-duty Marines.

The Navy in its latest release on Feb. 2 noted that there have been 118 “separations” so far for refusing the COVID-19 vaccine. Court documents dated Feb. 3 note out of 4,095 total initial requests, the Navy has denied 3,278 and 285 are under review.

As of Feb. 3, a total of 3,458 requests for religious accommodation out of 3,539 initial requests have been rejected by the U.S. Marine Corps, while 81 requests are pending review, court papers show.

The U.S. Coast Guard has denied 578 of 1,308 initial requests for religious exemption from the vaccine mandate, and 715 requests are under review.

Austin and military leaders have argued that the vaccine is critical to maintaining military readiness and the health of the force. And all of the services have now either discharged personnel for refusing the vaccine or put a system in place to do so.