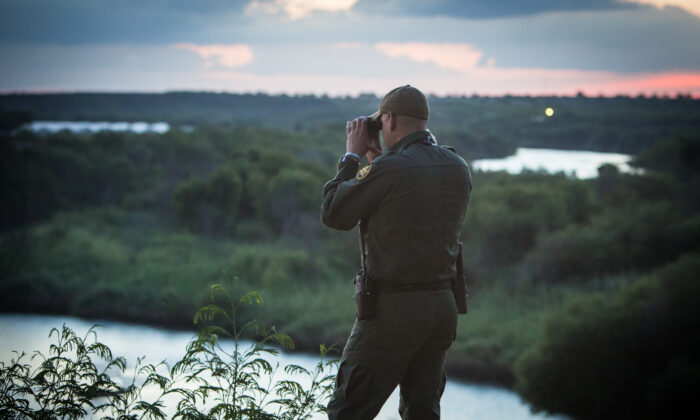 A Border Patrol agent watches for people crossing the Rio Grande illegally from Mexico into the Texas city of Roma on May 31, 2017. (Benjamin Chasteen/The Epoch Times)
Immigration & Border Security

An anonymous border patrol agent who claims to have been working in Customs and Border Patrol (CBP) for over ten years spoke out about leaked administration documents obtained by Project Veritas.

The Department of Homeland Security (DHS) documents, according to the non-profit journalist group, say that “criminal aliens with sex-related offenses are attempting to re-enter the United States in record numbers during the COVID-19 pandemic.”

The anonymous insider said that the documents, labeled “unclassified//law enforcement sensitive,” are not supposed to be shown to the public. One of them dated March 24, 2021, has the header “Border Intelligence Daily” and reads “Public Safety: FY 2021 Sex Offender Encounters by U.S. Border Patrol Reach Five Year High.”

The leaked document reads that there have been 214 sex offender encounters, or arrests, from October 2020 to February 2021, compared to the yearly total of 154 during the previous fiscal year.

The insider said the report is accurate and even “possibly underreported” because sometimes criminal backgrounds go undiscovered.

“I would probably say they’re underreported,” the insider said. “All the records of the criminal aliens and sex offenders that we arrest now, they all have been previously deported from the United States for committing these crimes in the United States.”

The Epoch Times reached out to DHS for comment on the accuracy of the documents.

The insider explained how agents run checkpoint operations to catch drug and human smuggling, or trafficking, and that they encounter situations like these every day.

The insider was asked how the policies of the current administration compare to the previous one.

He said that this is his third administration, having started when Obama was president.

“It’s very dangerous for both us and the people we arrest to be crossing illegally,” said the insider. “Policies of Biden letting them stay, changing from the ‘Remain in Mexico’ policy under the Trump administration. When he [Biden] removed that, it just opened the floodgates for family units and small children crossing that border illegally.

“From the time Trump took over, it was a complete overhaul. Everybody got punished. Everybody got deterred, everyone got a file. Nobody got just sent back unless it was a medical emergency or they were a child.

“The traffic slowed down. All the people in our custody were treated far more humane[ly] under the Trump administration than any other previous. Under Obama, it was just like, a horrible stench. Every time you worked in a detention center you’d get sick.

“People were packed in, three–four hundred people in a room. But under the Trump administration, there was no more than 20 in a room.”

Earlier this month, a man that came into the United States illegally who had been previously incarcerated in 2017 for sexual assault against a child was arrested again by the San Diego Sector Border Patrol.

It was the 25th arrest of this type since the start of the new fiscal year, reaching the record high reported last year.

Only 25 illegal immigrant sex offenders were arrested in the San Diego Sector during the entire 2020 fiscal year. That number was reached within the first five months of fiscal year 2021, reported U.S. Customs and Border Protection (CBP).

Border Patrol spotted the 34-year-old Mexican national while patrolling the Otay Mountain Wilderness, about a mile and a half north of the border. He subsequently admitted to his illegal presence in the United States.

The agents then found out that he had a criminal record from 2017, when a Nevada judge gave him four years of prison for lewd conduct with a child.

He is now facing more charges for re-entering illegally after having been deported.