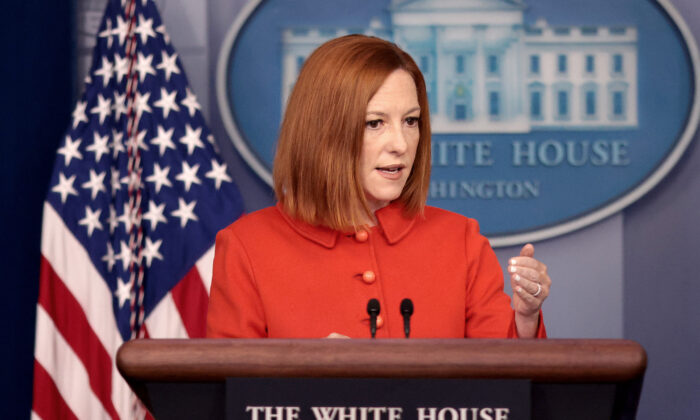 Psaki on Thursday again claimed that the images show “horrible and horrific” treatment of mostly Haitian illegal immigrants in the area.

“We will no longer be using horses in Del Rio,” she said following criticism of the images.

In the same statement, Psaki also made reference to the Trump administration’s border policies, alleging that the Biden administration “could not see it as any more different from the policy of the prior administration.”

“Which the president feels, we all feel, was inhumane, immoral, ineffective, wasn’t operationally working. And because of the disfunction of it, we have led to a very broken system that we’re dealing with today,” she said in a comment.

Over the past week, White House officials have echoed claims made by some media pundits, pro-immigration activists, and certain Democrats about images and video footage of agents grabbing people who illegally crossed into the United States from Mexico. Some have claimed, without providing evidence, that Border Patrol officials were whipping the Haitians with their reins, which are used to control the horse.

The Biden administration, which controls Border Patrol agents via the Department of Homeland Security, has received significant bipartisan criticism over a swelling immigration crisis near a bridge in Del Rio, where more than 15,000 Haitians have amassed in recent days. Some experts say that the camps under the bridge—where piles of garbage are located just feet from sleeping areas—will lead to outbreaks of COVID-19 and other transmissible diseases.

This week, Psaki and other White House officials, including Department of Homeland Security Secretary Alejandro Mayorkas, in response to questions about the crisis in Del Rio, have often made reference to the horse patrol images while saying that it is currently carrying out an investigation into the matter.

However, a top Border Patrol union official, Brandon Judd, told The Epoch Times this week that agents were not whipping their reins at the illegal aliens.

Judd also pointed to the makeshift shantytown that was erected by Haitians under the Del Rio bridge: “You tell me. Does this look like it’s humane right here?”