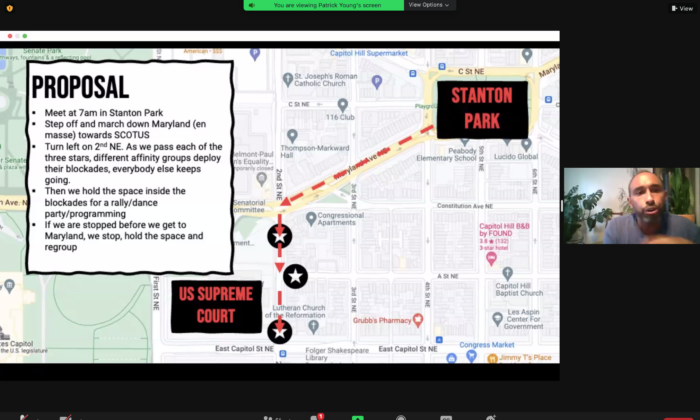 Shut Down D.C.'s plan to march on the Supreme Court, then blockade its entrances to prevent the justices from entering. Screenshot taken online at June 7, 2022. (Jackson Elliott/The Epoch Times)
US

Protesters Finalizing Plans for Blockade of Supreme Court on June 13

Protesters planning to blockade the Supreme Court say they expect to be arrested for their actions, but will break the law anyway.

In an online meeting organized by Shut Down D.C., several activist groups joined forces to plan how to prevent justices from entering the U.S. Supreme Court on June 13.

The protest is a response to a leaked Supreme Court draft opinion that shows the high court might be considering overturning Roe v. Wade.

In Roe v. Wade, the Supreme Court ruled that abortion was a constitutional right and that legislators could only regulate it to a limited extent. But the Supreme Court’s leaked Dobbs v. Jackson draft decision would put decisions on abortion into the hands of state and national legislators.

June 13 is the first Monday after one of the court’s three remaining conference days. However, no one knows when the anticipated decision will go public.

According to messages seen by The Epoch Times, protesters currently have only one attempt to blockade the court planned. However, activists said they hope to have more actions in the future.

The Supreme Court traditionally ends its term on July 1, but it might go longer this year because of an unusually high number of cases.

In an online meeting on June 7, about 60 activists debated how to best block the vehicle entrances to the court.

Ideas included using baby strollers, linking arms by the entrances, and using U-locks. One protester rejected the idea of strollers because it would send the wrong message.

“I just agree that messaging might be confusing and ammunition for pro-life—I mean, anti-abortion people,” one said.

Another said, “It’s a lot easier for them to move strollers than move us.”

Protesters have planned a June 12 workshop to train people on how to block entrances.

Protesters said they knew that stopping traffic would break the law.

“By blocking it, we are breaking a law. We’re going to block traffic, which is not very legal,” said Cassie, who was with activist group SCOTUS6.

Then she said breaking the law in this way was civil disobedience.

“As far as civil disobedience goes, the intention is to be disruptive and force change,” Cassie said. “If you want to talk more about the legal aspect of it, I suggest we talk outside of this meeting.”

Activists noted that protest participants who blocked off the Supreme Court’s entrances should expect arrest and fill out a “jail support form.”

However, arrests were unlikely to start until protesters blocked off the court’s entrances, according to protester Philip Ateto. Washington law enforcement doesn’t usually arrest protesters just for marching.

“That is a very low-risk thing in the city,” Ateto said. “We are highly unlikely to have any problem from any law enforcement agency until we stop.”

A few activists said they were coming from other cities to protest.

“I just want people to know that I’ll be getting in on a bus from NY at 5:30,” said Wendy Brandes in the group’s chat.

Although the meeting had about 60 attendees, activists there said they expected massive numbers of protesters on June 13.

The people who showed their faces in the Zoom call were usually in well-furnished rooms.

The protest’s leaders announced that they would create a plan based on consensus discussion.

“We do have, despite all possible indications to the contrary, a little bit of a plan,” one activist said. “Nobody knows everything, but together we know a lot.”

Although many people were able to share ideas, the meeting appeared to struggle at times to form a cohesive strategy.

“We want to make sure we don’t have too many people on one blockade and not enough on the other,” an activist said.

Near the end of the call, one of the activists asked about how the protest march would accommodate people with “mobility issues.”

“We want to make sure we’re being inclusive,” an activist said.

By the end of the meeting, the protesters had yet to make a final decision on how to blockade the Supreme Court’s entrances.