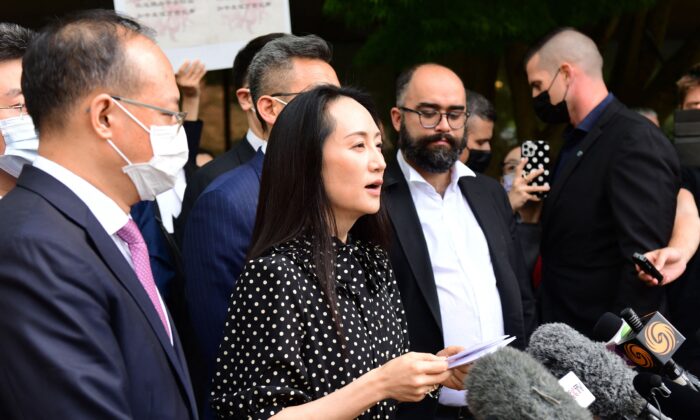 Former diplomat Michael Kovrig and business consultant Michael Spavor are both home in Canada now. On Sept. 24, they were released by Beijing immediately after Huawei Chief Financial Officer Meng Wanzhou was released from Canadian custody, following U.S. prosecutors’ decision to end the extradition request for her and to put the prosecution on hold until December 2022.

The deferred prosecution agreement between Meng and the United States would allow her to return to China. In December 2018, Meng was arrested at Vancouver International Airport on a U.S. extradition warrant. She is accused of being involved in a scheme to use the global banking system to evade U.S. sanctions against Iran. The detentions of the two Canadians were widely seen as a tit-for-tat response by the Chinese regime over Meng’s arrest—a tactic called “hostage diplomacy.”

Kovrig and Spavor were detained in China for over 1,000 days and Chinese authorities accused them of spying. Kovrig had a closed-door trial in March but the verdict moved to an unspecified date. Last month, a Chinese court sentenced Spavor to 11 years in prison.

It’s hard for any outsider to imagine the reaction of family members and friends when the two men were released. It’s a time for both Michaels to realize that their return to freedom could be a whole new challenge, especially on how to deal with the mental health fallout that comes from such extreme experiences. It’s a phenomenon that my NGO Safeguard Defenders is familiar with, often arranging mental health support for victims of disappearances, detentions, and torture. Being released from detention is often a mixed blessing—a happy occasion that brings a whole new slew of challenges.

The Trudeau government in Ottawa has withstood extensive criticism for its handling of the case, and so has both the Trump and Biden administrations. Criticism has focused on the failure to move quickly in leveraging reputational and political risks against Beijing for its blatant hostage taking. Still, to their defense, after acting far too slow and not taking enough action early on, both governments came to realize that the cost to Beijing had to be increased, with Canada rallying allies under the banner of general action against arbitrary detention being one key action.

For a long time, the hardliners in Beijing have likely been under pressure, as NGOs, civil society actors, and media, alongside government action have pushed the reputational and political costs to unimaginable levels for China. While I sit here in Europe, where people are often blissfully unaware of what goes on in China, the case of the “Two Michaels” is an anomaly, one where people outside the “China sphere” have been shocked by Beijing’s behavior. It’s not for nothing that the leader of Lithuania recently said that China’s behavior concerning the “Two Michaels” was a wake-up call for us all.

In the end, the release of Meng has proven the hardliners right, despite the much higher-than-expected cost. This high cost is likely the reason why we have not seen other people being taken as hostages in China. Still, with hardliners now being able to show that hostage diplomacy does indeed yield the desired results, foreigners in China are likely in greater danger now than ever. Hostage diplomacy, the hardliners will contend, is effective—even if the cost ends up far greater than anyone in Beijing can foresee.

In the end, the Canadian government had no choice but to engage wholeheartedly to get their citizens back, which is a sign of a responsible government. However, for a long time, it failed to respond quickly to pressure Beijing and to raise the cost of its hostage diplomacy. Canada, like Australia and Sweden before it, started taking action far too late, relying on normal diplomatic procedures—the ones they are accustomed and comfortable with—before taking wider action.

Hopefully, once and for all, Western governments will now have learned that the Chinese Communist Party (CCP) cannot be dealt with as any other government, and when the next Michaels are taken—and they will—governments will have learned to launch wide counter measures quickly, and involve their allies, rather than squander a whole year.

For Canada, it’s now time to consider the usefulness of the bilateral consular agreement with China—an agreement that China has violated time and time again. Why maintain an agreement which bounds Canada, but which China ignores at will without consequences? It’s time to focus energy on diversifying Canada’s supply chains and lessen its economic dependency on China, much like Australia and Japan are now doing. It’s time to counter the undue influence of CCP-operated groups on Canada, to rein in CCP media such as CGTN and CCTV, which operates without oversight. Most importantly, the parliamentary committee established to advise on whole-of-government policy changes for dealing with China needs to be given room to put forth real and concrete proposals for how to better deal with the Chinese regime in the future.

In the end, like with all complicated political matters, I think a lot of us are left feeling conflicted; relieved and happy that both Michaels are finally free from a hellish situation that they should not have been put through, but also worried that the way it ended will embolden the CCP to do more, and do worse.