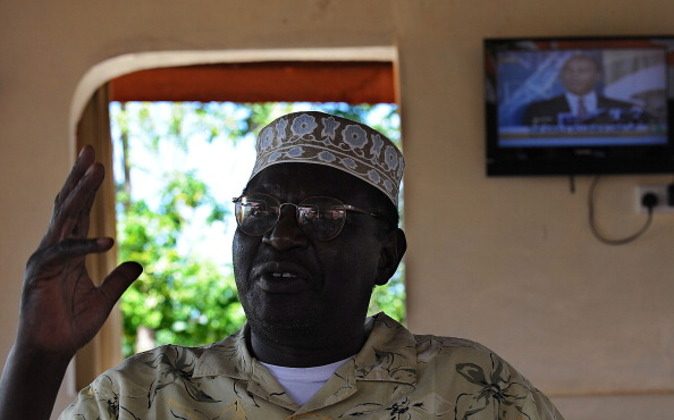 President Barack Obama's Kenyan half brother, Malik Obama speaks at an interview January 16, 2013 at the peaceful hamlet of Nyang'oma in Kogelo renowned as the Obama's traditional home. Malik has launched his own political career by announcing his intention to run for a Kenyan gubernatorial seat in the upcoming March 4 general elections. Malik, 54, who shares a father with the US president told AFP that the achievements of his more famous half brother have 'inspired and challenged' him to get into active politics in his homeland. The trained economist said he is the right candidate to deal with the 'endless cycle of poverty and unemployment that bedevils my people.' . AFP PHOTO/Tony KARUMBA (Photo credit should read TONY KARUMBA/AFP/Getty Images)
By Jim Liao

Malik Obama, the half-brother of President Obama, said he’ll be making the trip from Kenya to the United States in November to vote for Donald Trump, the Republican presidential candidate.

“I like Donald Trump because he speaks from the heart,” Malik Obama told the New York Post from his home in the rural village of Kogelo.

“Make America Great Again is a great slogan. I would like to meet him,” he said.

Malik Obama previously worked in Maryland, where he was a registered Democrat.

Obama, 58, also told the Nation that he feels Trump is a “down-to-earth” person who doesn’t shy away from the issues.

“Donald is a down-to-earth kind of person, he also approaches issues directly and does not mince his words and being a candidate of the Republican Party I support his candidature,” said Obama, according to the newspaper.

In addition, he told the Post that Trump is providing something “new and fresh” in politics.

Obama, in particular, expressed “deep disappointment” towards the FBI’s decision to not prosecute Democratic candidate Hillary Clinton for her use of a private email server.

“She should have known better as the custodian of classified information,” said Obama.

Donald Trump to Partake in Reddit’s ‘Ask Me Anything’

Obama’s voting preference has not gone unnoticed. On Sunday, Trump went on Facebook to acknowledge his support, writing, “Wow, President Obama’s brother, Malik, just announced that he is voting for me.”

On Twitter, he added that his brother “was probably treated badly by [the] president—like everybody else!”