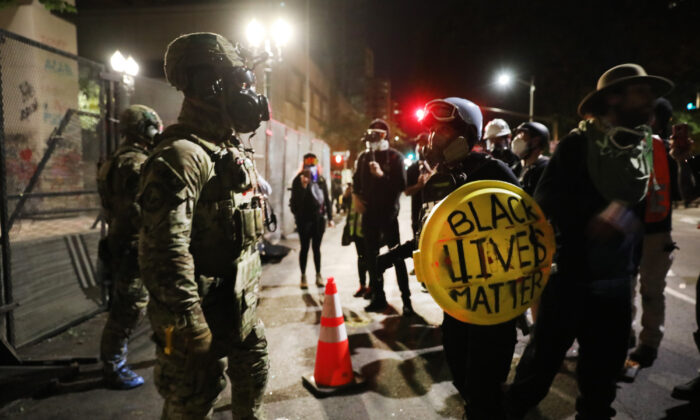 Portland Protesters Sue Trump Administration Over Use of Federal Force

Portland protest groups Don’t Shoot Portland and Wall of Moms are among those suing the Trump administration for what they claim are violent and intimidating federal actions that override local law enforcement and aim to quell peaceful and lawful protests.

The civil action suit (pdf), filed on Monday in the U.S. District Court for the District of Columbia, accuses Attorney General William Barr, the Department of Homeland Security (DHS), and eleven other federal agencies and individuals of implementing an “unlawful policy to quash” protests and free speech.

The plaintiffs, including five individual Black Lives Matter protesters, claim in the lawsuit that they have been threatened with bodily harm and arrested without probable cause, shot at with rubber bullets and other projectiles by federal officers and “tear-gassed night after night, left vomiting and unable to eat or sleep because of the toxic poison blasted at them.”

“Since July 4, they have been repeatedly attacked by an army of over 100 camouflage-clad federal agents,” the lawsuit claims, alleging violation of constitutional rights to freedom of speech, assembly, and due process, as well as freedom from unreasonable seizure.

The seven plaintiffs also argue federal officers are overstepping their law enforcement mandate, claiming that Operation Diligent Valor, as the Trump administration has named the deployment of federal agents to Portland following weeks of violent unrest, does not meet the legally-permitted standard of protecting federal property.

“Defendants’ statements, a recently revealed internal DHS memorandum, and the conduct of DHS officers on the ground far from the federal courthouse make clear that Operation Diligent Valor actually furthers a separate DHS policy: to intimidate and silence protesters because of their message,” the lawsuit states. It also claims the Defendants’ invocation of Title 40, Section 1315 of the United States Code is just a pretext for suppressing lawful protests. The section allows federal law enforcement intervention to protect federal property, like the Mark O. Hatfield United States Courthouse in Portland, which has become a focal point of both law-abiding protesters and violent rioters.

Early Monday, federal agents fired what appeared to be tear gas, flash bangs, and pepper balls to clear a mass of people rioting outside the courthouse. The protest started peacefully late Sunday, with organizers giving speeches and leading chants with the crowd, but things intensified as the night wore on, with some people climbing over the fence surrounding the courthouse, while others shot fireworks, banged on the fence, and projected lights on the building. After a riot was declared, Portland police said they arrested six people.

Wolf made the remarks in an interview Sunday as he criticized Portland leaders for claiming that the city’s demonstrations are peaceful.

The Trump administration has faced intense scrutiny and criticism over its decision to surge federal forces to Portland, which has seen over 50 nights of riots that regularly follow peaceful daytime demonstrations.

Democratic leaders in the progressive city had begun to oppose the nightly violence but reversed course after President Donald Trump said he personally ordered federal forces to resist the destruction of federal property and monuments.

Oregon’s U.S. Attorney Billy J. Williams told The Oregonian newspaper recently that the federal government will not abandon any of the federal buildings in Portland, adding that until what he said were “violent extremists” end their siege of the Mark O. Hatfield United States Courthouse, they can expect resistance from federal agents.

“When the violence ends, then there won’t be a need for the presence of nightly federal officers. … It seems quite simple,” Williams said.