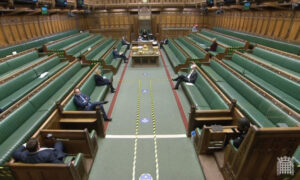 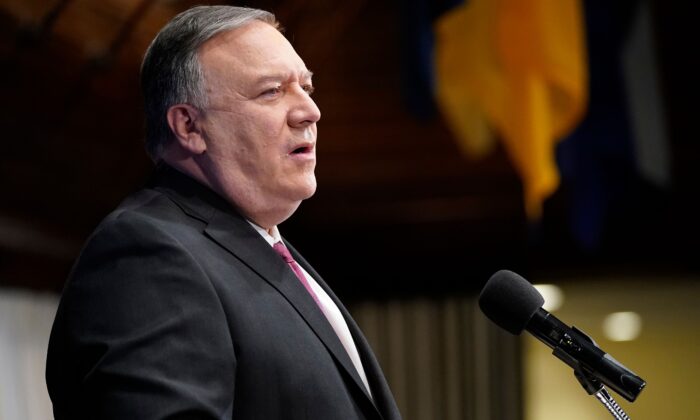 US Secretary of State Mike Pompeo speaks at the National Press Club in Washington, on Jan. 12, 2021. (Andrew Harnik/POOL/AFP via Getty Images)
China-US News

U.S. Secretary of State Mike Pompeo on Jan. 20 expressed hope that the new administration under President-elect Joe Biden will continue to confront threats posed by the Chinese Communist Party (CCP).

“This challenge, the threat from the Chinese Communist Party, is real; it is existential to the United States,” said Pompeo in an interview with Fox News, according to a transcript from the State Department.

“I am counting on the next administration continuing our work, continuing to build out on the things that we have done in the exact way that the American people will demand,” he added.

Pompeo was answering a question about a comment made by National Counterintelligence and Security Center Director Bill Evanina, who told Fox in a separate interview that China is a threat more than any other country.

Evanina said, “I think the challenge for the Biden administration will be to understand the scope and scale of some of the Chinese threats in the American landscape, domestically, and what is the best course to defeat that.”

The CCP is the central threat of our time. CCP authoritarianism isn’t the future the free world wants … but it’s the future we’ll have if we let our guard down again. pic.twitter.com/ARqmG689ER

In the last four years, the Trump administration has confronted the CCP on a range of issues, including unfair trade practices, espionage, malign influence in the United States, security threats posed by Chinese technology, and its human rights abuses against religious minorities and Hong Kong residents.

Pompeo also declared on Thursday that Beijing has committed genocide and crimes against humanity against Uyghur Muslims. The announcement marks one of the Trump administration’s most severe criticisms against the CCP for its severe human rights abuses in China.

“The incoming administration should make the CCP pay for its crimes by continuing to punish the officials and companies responsible for its genocide of the Uighurs. Failing to impose consequences will only embolden the CCP to use the same tactics against more innocent people,” stated Cotton according to a press release from his office.

“Uyghurs have been looking for accountability for years, and this is the first time a government designates the Uyghur crisis as a genocide,” stated WUC President Dolkun Isa in a statement.

It remains to be seen how the new U.S. administration will confront the CCP. In a Senate hearing on Tuesday, Biden’s nominee for secretary of state, Antony Blinken, said that “Trump was right in taking a tougher approach to China.” However, he added he disagreed with Trump on how the U.S. President “went about it in a number of areas.”

Biden’s critics have expressed concerns that the new administration would be soft on China, as Chinese state-run media have openly stated their preference for Biden.

On Jan. 19, China’s state-run media Global Times reported that any changes that Biden made “will at least be better than Trump’s policies,” quoting a Chinese researcher from the state-run Chinese Academy of Social Sciences.

“I have great confidence that the American people have come to understand this challenge from the Chinese Communist Party and will expect every leader, whatever political stripe, to continue to protect and secure American freedoms,” Pompeo concluded.