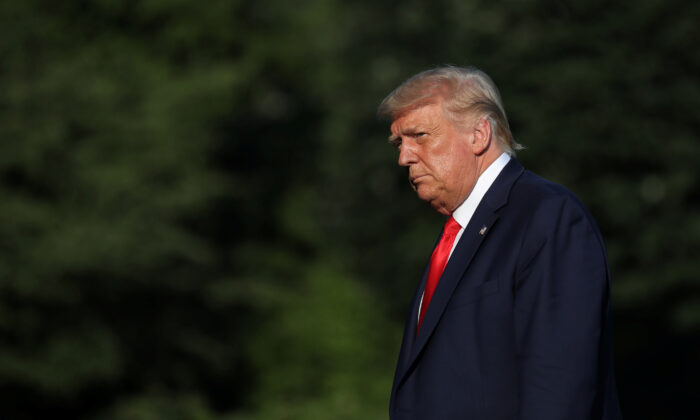 President Donald Trump returns from his travel to Atlanta, on the South Lawn of the White House on July 15, 2020. (Carlos Barria/Reuters)
2020 Election

The National Association of Police Organizations formally endorsed Trump, in recognition of his “steadfast and very public support for our men and women on the front lines, especially during this time of unfair and inaccurate opprobrium being directed at our members by so many,” the group’s president, Michael McHale, wrote in a letter to the president.

The national association, a coalition of police unions and groups across the country, represents more than 1,000 units and associations and 241,000 sworn law enforcement officers.

Trump, in a social media post, shared the letter while thanking the group for its endorsement.

“I will ALWAYS back the men and women in blue, and never let you down. LAW AND ORDER will prevail!” the president said.

Trump has come out against recent efforts to defund the police. Biden, the presumptive Democratic presidential nominee, said last week that he believes some funding should be redirected from police departments.

That answer appears to contradict a campaign statement issued last month that stated: “Vice President Biden does not believe that police should be defunded.”

The president “fights everyday … for the cops that keep us safe” while “Joe Biden has done nothing to stop his party’s defund the police movement and remains silent as police officers across the country are being attacked by violent rioters and protesters,” Bob Paduchik, a Trump campaign adviser for law enforcement and labor unions, said in a statement.

Biden’s campaign and the Democratic National Committee didn’t immediately respond to requests by The Epoch Times for comment.

While accepting the group’s endorsement in 2012, Biden said, “The President and I are honored to accept the endorsement of the National Association of Police Organizations.”

“Over the past week, we again saw the incredible sacrifices of our nation’s police officers and first responders,” Biden said at the time. “Every day, these brave men and women put their lives on the line to keep our communities safe—running into harm’s way when everyone else is running out. The President and I will continue to do everything we can to keep police officers across the country on the beat and fight back against cuts that would put our public safety at risk, and make an already tough job even tougher.”