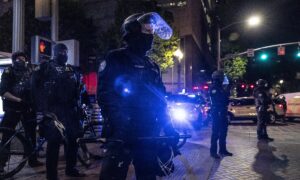 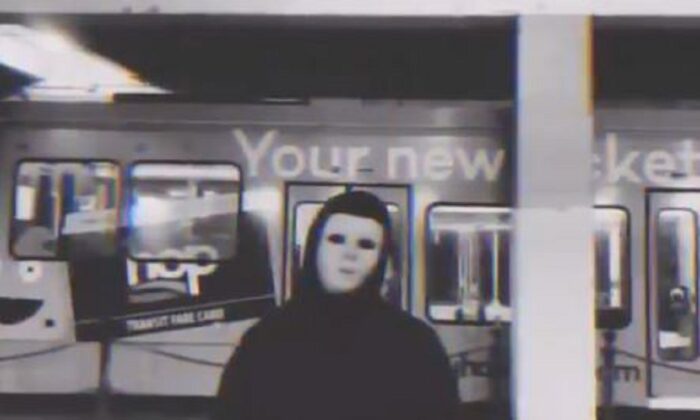 A masked person is seen during a video that contained a threat to Portland Mayor and Police Commissioner Ted Wheeler. (Screenshot via The Epoch Times)
Crime and Incidents

“PPB is aware of the video and has launched an investigation into the threats made against the Mayor,” a Portland Police Bureau (PPB) spokesman told The Epoch Times via email.

“The FBI is aware of the video and is assisting Portland Police Bureau in the investigation. Due to the on-going nature of the case, we have no further information to release at this time. Anyone with information as to the person or people responsible for this video are encouraged to contact the FBI or PPB,” an FBI spokeswoman added.

The video, posted on social media this week, showed a person in a mask standing in downtown Portland as a narrator spoke.

“We come to you as a small collective from within the anarchist and antifascist community,” the voice said. “We hope with his message to simply convey a few points commonly agreed upon within this community.”

The anarchist also said that “window-smashing and riots are a necessary escalation” as it claimed that peaceful marches and voting have not brought about necessary change.

As the voice spoke, scenes were shown including the recent police shooting of a black teenager in Chicago, a bus pulling up in Portland behind the masked figure, and the figure standing in front of a wall with the names George Floyd and Breonna Taylor scrawled on it.

The threat came near the end, as the voice said: “Ted, we are asking for the last time that you resign. If you ignore this message outright, the destruction to your precious way of life is going to escalate. Blood is already on your hands, Ted. But next time it may just be your own.”

Asked for comment on the video, a spokesman for Wheeler told The Epoch Times in an email, “The Police Bureau has opened an investigation into the threat.”

No explicit link to the far-left, anarcho-communist Antifa network was contained in the footage except for the end, when a symbol the network uses was flashed on the screen. The video quickly received praise from Antifa and Antifa-linked accounts on social media until it was taken down. Antifa stands for antifascist but the network’s members regularly engage in violence and destruction.

The network is most active on the West Coast in cities like Portland and Seattle.

Rose City Antifa, Portland’s primary Antifa group, did not immediately respond to a request for comment.

The group posted on Twitter, in response to an article about an investigation into the video: “Really looking around for a reason for local government and the FBI to announce this publicly other than to specifically terrorize anti-racist protesters with threats of repression, pretty sure we’re not gonna find one.”

The threat came after Wheeler urged residents in Portland to help authorities combat the repeated acts of destruction carried out by self-identified anarchists, including members of Antifa.

“If you see somebody engaged in criminal activity, and you can safely film it or take a photograph, please do so,” he said, adding that sharing information with law enforcement would lead to unmasking the wrongdoers.

Criminals in Portland have taken in recent years to wearing masks to obscure their identity and often harass and assault people who attempt to film the riots that take place on a regular basis.