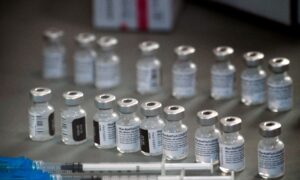 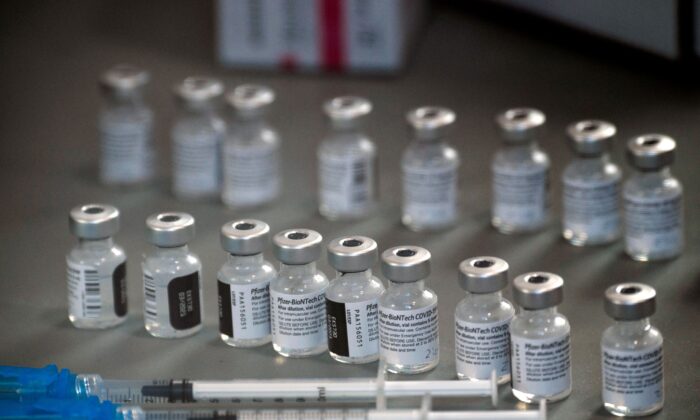 Syringes and vials of the Pfizer-BioNTech COVID-19 vaccine are prepared to be administered at a drive up vaccination site from Renown Health in Reno, Nev. on Dec. 17, 2020. (Patrick T. Fallon/AFP via Getty Images)
Vaccines & Safety

Data from a clinical trial show that Pfizer’s COVID-19 vaccine triggers a strong immune response in children between the ages of 5 and 11, the company and its German partner said on Sept. 20.

The shot also had a favorable safety profile in the age group in the phase 2/3 trial, according to a summary of the trial data released by Pfizer and BioNTech.

Approximately 2,268 children received two shots of 10-micrograms each, spaced 21 days apart. A month after receiving their second shot, the children had a SARS-CoV-2-neutralizing antibody geometric mean titer of 1,197.6, which was around the same level seen in participants between the ages of 16 and 25, who were used as a control group and given two doses of 30 micrograms each.

The companies also said that the younger group tolerated the vaccine well, with side effects “generally comparable” to those seen in the older group. Side effects seen after the vaccine include severe allergic reactions, heart inflammation, and fever.

A Pfizer spokeswoman told The Epoch Times via email that there were no cases of myocarditis, or heart inflammation, in the trial.

There was no control group of non-vaccinated children, it wasn’t clear how many COVID-19 cases occurred among the participants, and the specific data weren’t released. Pfizer declined to say when the data would be made available, apart from outlining plans to submit it for peer-reviewed publication soon. The companies also plan to share the results with the Food and Drug Administration and the European equivalent of the U.S. drug regulator. The companies are hoping to gain emergency use authorization for the shot for children aged 5 to 11.

“We are eager to extend the protection afforded by the vaccine to this younger population, subject to regulatory authorization, especially as we track the spread of the Delta variant and the substantial threat it poses to children,” Albert Bourla, Pfizer’s CEO, said in a statement.

“We are pleased to be able to submit data to regulatory authorities for this group of school-aged children before the start of the winter season,” added Dr. Ugur Sahin, CEO and co-founder of BioNTech. “The safety profile and immunogenicity data in children aged 5 to 11 years vaccinated at a lower dose are consistent with those we have observed with our vaccine in other older populations at a higher dose.”

The Biden administration said the announcement was good news.

“We were encouraged to see that but it needs to move its way through the official government process,” White House press secretary Jen Psaki told reporters in Washington.

But others questioned why so little information was released by Pfizer and its partner.

“Pfizer’s transparency is poor. Releasing some actual data would be nice,” Dr. David Boulware, a professor of medicine at the University of Minnesota Medical School and an infectious disease doctor, wrote on Twitter.

Experts said the information that was released showed that the study didn’t look at effectiveness, but did explore immunogenicity, or the triggering of an immune response.

“There is far more data to look at. Hopefully we’ll get those data to review within the next few weeks so we can make the best decision for America’s children,” Dr. Paul Offit, a member of the Food and Drug Administration’s (FDA) vaccine advisory panel, said on CSPAN.

The update comes as all three vaccines authorized or approved for use in the United States continue to wane in effectiveness, particularly against infection by the CCP (Chinese Communist Party) virus, also known as SARS-CoV-2, which causes COVID-19.

U.S. regulators last month approved Pfizer’s vaccine, but only for those 16 or older. The jab remains under emergency use authorization for children aged 12 to 15; no other shot is authorized for that age group.

Pfizer and BioNTech also are studying the effects of the vaccine in children as young as 6 months of age.

U.S. authorities have said they support vaccinating children, even though they are at extremely low risk of contracting severe cases of COVID-19, data from around the world show.

Once the data is submitted to the FDA, “they will work 24/7 to go through it and try to assess whether it’s time to grant an approval, and that will happen in weeks and not months,” Dr. Francis Collins, head of the National Institutes of Health, said on Sept. 19.

Pfizer officials said last week they expect to ask for an expansion of the authorization for children aged 5 to 11 in the coming weeks, followed soon after by a request for expansion to children between 6 months and 5 years of age.

“Depending on how long the FDA takes to review the application … you could have a vaccine available to children as early as probably by the end of October,” Dr. Scott Gottlieb, former FDA commissioner and a Pfizer board member, said on CNBC’s “Squawk Box” on Sept. 20.

Correction: A previous version of this article inaccurately described the summary results of the clinical trial. The companies said the trial shows the vaccine triggers a robust antibody response and has a favorable safety profile. The Epoch Times regrets the error.