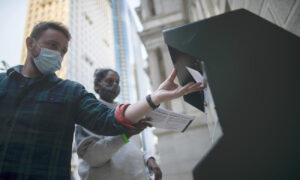 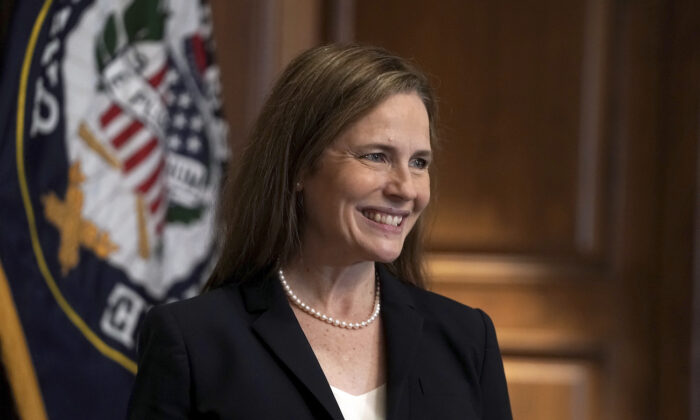 A county in Pennsylvania asked newly sworn-in Supreme Court Justice Amy Coney Barrett to recuse herself from a case involving an extension of mail-in ballots.

The motion to have Barrett recuse herself was filed (pdf) by the Luzerne County Board of Elections, which asked the Supreme Court to reject efforts by Republicans in the key swing-state to roll back some voting measures in Pennsylvania.

“The nomination and confirmation of a Supreme Court justice this close to a presidential election is unprecedented,” Luzerne County officials wrote. “As concerning as that is, what is even more troubling is the language President Trump has used in consideration of this nomination, linking it directly to the electoral season at hand, with implications for his own re-election.”

The motion included some quotes from President Donald Trump.

“I think this will end up in the Supreme Court. And I think it’s very important that we have nine justices,” Trump said several weeks ago when he was asked about the Supreme Court nomination after Justice Ruth Bader Ginsburg’s death. “It’s better if you go before the election, because I think this scam that the Democrats are pulling—it’s a scam—the scam will be before the United States Supreme Court. And I think having a 4-4 situation is not a good situation.”

The Luzerne County Board of Elections also cited articles from CNN, USA Today, an article that quoted Sen. Corey Booker (D-N.J.), and others to make its claim that Barrett should recuse herself.

Trump has repeatedly warned that widespread mail-in voting could lead to fraud or errors in the midst of the CCP virus pandemic. Meanwhile, several Democrat governors have warned that the results from the Nov. 3 election might not be finally counted for days after the election is over.

“It is clear that the present motion comes at an inopportune time for Justice Barrett, this being her first day as an Associate Justice,” according to the motion. “But this motion must be made now and acted upon favorably. Aside from the merits of the underlying petition seeking certiorari, there are raw procedural considerations instantly. Any action on these which includes Justice Barrett’s participation could be catastrophic to the delicate foundation of integrity and public confidence upon which the judiciary sits.”

Earlier this week, the Supreme Court rejected an attempt by Democrats to extend Wisconsin’s mail-in voting deadline. The ruling was 5-3, coming before Barrett’s confirmation. The three liberal-leaning justices dissented from the court’s order.

Chief Justice John Roberts said, “Different bodies of law and different precedents govern these two situations and require, in these particular circumstances, that we allow the modification of election rules in Pennsylvania but not Wisconsin.”

Barrett was sworn in after a 52-48 vote in the Senate, with no Democrats voting to approve her.

“I am grateful for the confidence you have expressed in me, and I pledge to you and to the American people that I will discharge my duties to the very best of my ability,” Barrett said after she was sworn in.