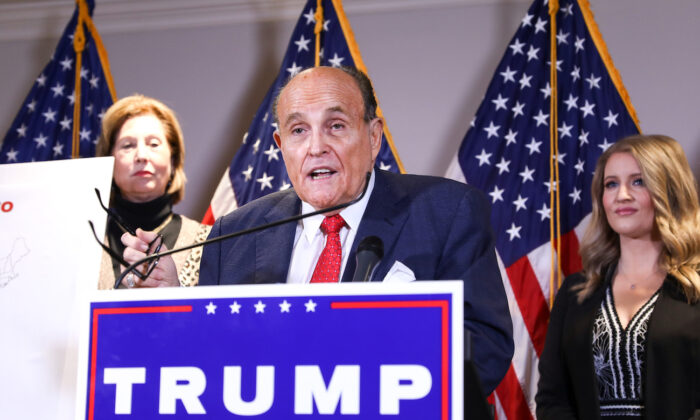 The Trump campaign’s legal team announced Tuesday that state legislatures in Pennsylvania, Arizona, and Michigan will be holding public hearings on the 2020 general election to restore confidence in election integrity.

“It’s in everyone’s interest to have a full vetting of election irregularities and fraud,” President Donald Trump’s personal lawyer Rudy Giuliani said in a statement. “And the only way to do this is with public hearings, complete with witnesses, videos, pictures and other evidence of illegalities from the November 3rd election.”

The Pennsylvania State Senate will hold its first hearing on Wednesday in Gettysburg. Participating senators will each provide a 5-minute opening statement, followed by testimony from witnesses who have filed affidavits alleging election fraud, the Trump campaign announced. Giuliani, former New York City mayor, will also be attending to hold a presentation.

The Arizona legislature and the Michigan legislature will each hold their own hearings on Nov. 30 and Dec. 1 respectively.

Jenna Ellis, Trump’s personal lawyer and legal adviser to the Trump campaign, said that the campaign is “pleased” about the hearings.

“There were serious irregularities, we have proof of fraud in a number of states, and it is important for all Americans to have faith in our electoral process,” she said in a statement. “All we have wanted from the outset is to count every legal vote and discount every illegal vote.”

A spokesperson for Republican Speaker of the Michigan House Lee Chatfield appeared to contradict the Trump campaign statement, saying that there won’t be a hearing in Michigan next week.

“The President’s legal team has been invited to submit written testimony instead,” Gideon D’Assandro, the spokesperson, told ABC News.

The legislature of each state decides how the state will select their representatives to the Electoral College, according to article 2, section 1 of the U.S. Constitution.

Pennsylvania, Arizona, Michigan are among six battleground states facing ongoing litigation amid allegations of voting irregularities from the Trump campaign and hundreds of witnesses. With 79 electoral votes between them, Pennsylvania, Georgia, Michigan, Wisconsin, Arizona, and Nevada will likely decide the outcome of the 2020 presidential election.

Michigan, Pennsylvania, Georgia and Nevada have voted to certify their states’ election results. Recounts are underway in Georgia and Wisconsin.

Arizona’s canvass is scheduled for Nov. 30.

The Electoral College will vote in December to decide the outcome of the race, and then the votes will be counted during the Jan. 6, 2021 Joint Session of Congress in Washington.