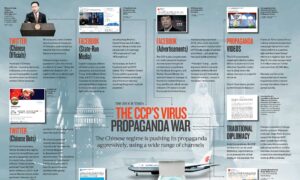 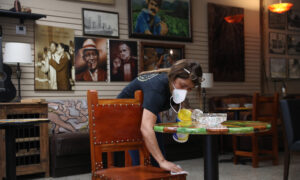 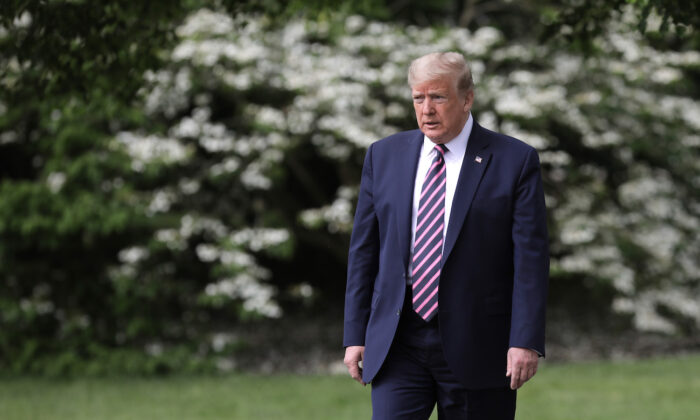 President Donald Trump walks across the South Lawn in Washington, on May 5, 2020. (Chip Somodevilla/Getty Images)
AMERICA

Over 600 Doctors Warn Trump of Consequences of Prolonged Lockdown

President Donald Trump on Tuesday received a letter from more than 600 doctors urging him to end the “national shutdown” put in place to curb the transmission the CCP virus, calling the nationwide restriction measures a “mass casualty incident” with “exponentially growing health consequences.”

In their letter obtained by Fox News, the doctors state that lockdown measures across the United States could cause “millions of casualties” from homelessness, alcoholism, substance abuse, and suicide.

They noted that missed routine medical checkups amid the CCP (Chinese Communist Party) virus pandemic, commonly known as the novel coronavirus pandemic, could mean patients miss out on potentially life-altering diagnoses, such as cancer and heart problems.

Is a lock-down legal? pic.twitter.com/0oq90qsWuX

“We are alarmed at what appears to be the lack of consideration for the future health of our patients,” they wrote in their letter, led by Dr. Simone Gold, a Los Angeles emergency medicine specialist. “The downstream health effects … are being massively under-estimated and under-reported. This is an order of magnitude error.”

The doctors note in their letter that since lockdown measures were implemented nationwide, phone calls to suicide hotlines have risen by 600 percent, sales of liquor have increased 300 to 600 per cent, while cigarette sales have also surged.

“Rent has gone unpaid, family relationships have become frayed, and millions of well-child check-ups have been missed.

“The millions of casualties of a continued shutdown will be hiding in plain sight, but they will be called alcoholism, homelessness, suicide, heart attack, stroke, or kidney failure,” they wrote. “In youths, it will be called financial instability, unemployment, despair, drug addiction, unplanned pregnancies, poverty, and abuse.”

A Doctor a Day Letter – Signed by Fox News on Scribd

“Because the harm is diffuse, there are those who hold that it does not exist. We, the undersigned, know otherwise,” the letter states. “It is impossible to overstate the short, medium, and long-term harm to people’s health with a continued shutdown.”

The letter addressed to the president includes the details of a number of patients, identified by their initials, and their experiences amid the pandemic.

“Patient A.F. has chronic but previously stable health conditions,” the letter notes. “Her elective hip replacement was delayed, which caused her to become nearly sedentary, resulting in a pulmonary embolism in April.”

The letter comes more than a week after Dr. Anthony Fauci, the nation’s top infectious disease expert, warned Congress that the U.S. will see “needless suffering and death” if it reopens too soon during the pandemic.

The president, meanwhile, has been praising states that are reopening after the prolonged lockdown. Every state has, in some way, relaxed harsh restrictions implemented to try to slow its spread.

One of the doctors who signed the letter addressed to the president, Dr. Mark McDonald, told Fox News that while lockdown measures “sounded reasonable” three months ago to prevent hospitals from becoming overwhelmed, it is now no longer a “valid argument.”

“It was a valid argument at the beginning based on the models that were given,” McDonald said. “What we’ve seen now over the last three months is that no city—none, zero—outside of New York has even been significantly stressed.”