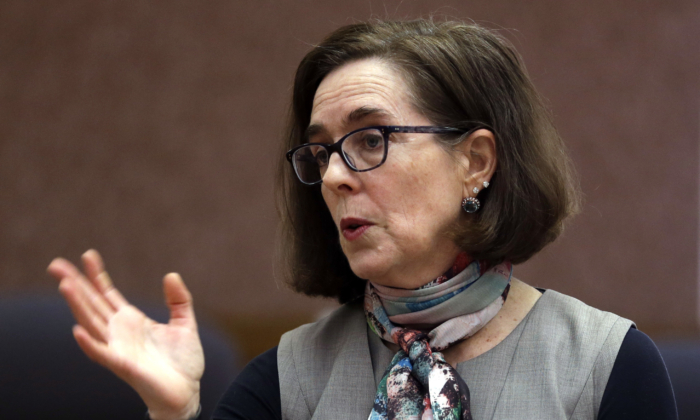 Oregon Deploys up to 1,500 National Guard Troops to Aid Hospitals Amid COVID-19 Surge

Oregon Gov. Kate Brown on Aug. 13 deployed up to 1,500 National Guard troops to help the state’s hospitals facing a rising number of hospitalizations amid a surge in COVID-19 cases.

An initial deployment of 500 troops will take place on Aug. 20 to assist hospitals around the state with logistics, handling materials and equipment, administering tests, and other hospital operations.

“I know this is not the summer many of us envisioned, with over 2.5 million Oregonians vaccinated against COVID-19. The harsh, and frustrating reality is that the Delta variant has changed everything. Delta is highly contagious, and we must take action now,” Brown said in a statement.

Oregon logged a record 635 COVID-19 hospitalizations on Aug. 10, prompting Brown to reinstate a statewide indoor mask mandate. The number of patients hospitalized with the virus has grown every day since then, reaching 784 on Aug. 13, according to data compiled by Johns Hopkins University.

The Delta variant, which became the dominant strain of the CCP (Chinese Communist Party) virus in July, is driving a meteoric rise in cases across a number of hot spots around the country. The variant constituted an estimated 97.4 percent of all CCP virus cases in the United States for the week of Aug. 1–7, according to the Centers for Disease Control and Prevention’s (CDC) genomic surveillance program.

Brown encouraged Oregonians to wear masks when going out in public and to take one of the CCP virus vaccines, which she said are “safe, effective, and widely available.”

The effectiveness of the two most widely used COVID-19 vaccines in the United States has dropped significantly in July, according to a new study.

The shots from Moderna and Pfizer were highly effective in preventing transmission of the CCP virus between January and June, researchers with the Mayo Clinic and the Massachusetts-based data analytics company nference discovered.

However, the efficacy of Moderna’s vaccine dropped to 76 percent in July, with Pfizer’s plummeting to 42 percent, the researchers said.

A CDC advisory panel on Aug. 13 voted 11–0 to recommend COVID-19 vaccine booster shots for individuals with weak immune systems. The decision applies only to those who have received two doses of the messenger RNA-based vaccines made by Moderna or Pfizer.

Nearly 167.7 million Americans, or just over half, were fully vaccinated against the virus as of Aug. 13.

More than 81 percent of counties in the United States reported high levels of transmission of the CCP virus as of Aug. 12, according to the CDC.