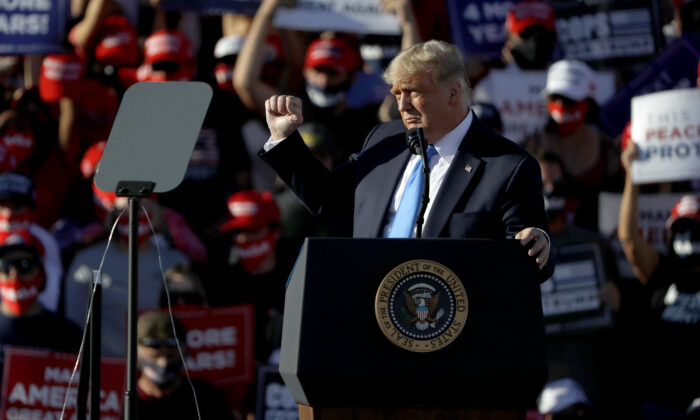 As arguably the most astonishing election campaign in American history comes into its last two weeks, many Americans and many foreign observers of the United States are wondering how the politics of the country became so disheveled.

The two largest social media companies are publicly attempting to suppress revelations of, at the least, the Democratic candidate profoundly misleading voters and, at the worst, outright bribery of the candidate and his family by a foreign power. Scandal goes beyond the apparent offense of the politician and the coverup, into attempted systematic disinformation of the country by its largest social media corporations.

The Democratic candidate is almost universally considered to be suffering from the earliest stages of dementia after 36 years in the U.S. Senate, eight years as vice president, and four more years waiting for this presidential campaign. He bombed in the early primaries, was resuscitated by the party elders, elevated to spare the party a Marxist candidate (Bernie Sanders), but then signed on to practically all of the Sanders program, although he is now professing second thoughts about some of the peppier elements of that program.

As his vice presidential candidate, he selected someone who tanked so badly in the early stages of the campaign for the nomination that she didn’t last until the first primary, and is generally considered by organizations that monitor these things to be the most left-wing member of the U.S. Senate.

The Democratic nominee was a serial plagiarist who in pre-vice presidential challenges for his party’s nomination never got above 2 percent support. He’s running against an incumbent who’s had one of the most successful first terms in the history of the United States.

The Democratic challenger isn’t identified with any particular achievement in his long career in Washington, whereas the incumbent has in four years a remarkable record—in tax and regulation reduction, elimination of illegal immigration, reduction of unemployment (prior to the COVID pandemic), and elimination of oil imports.

He renegotiated unfavorable trade deals, recognized the challenge of China, revived the concept of nuclear non-proliferation, spared the country an insane green regime, has made the greatest advances in Middle East peace in more than 40 years, and has managed both the public health and economic aspects of the coronavirus pandemic extremely skillfully, despite some public relations lapses.

The Democratic nominee is running somewhat ahead of the president, according to most polls, because of his greater advertising budget and the unceasing crescendo of an almost unanimous national media hostility to the president. And that hostility is partly stylistic, partly a reaction to the president taking a stance—when he was running in 2016 and ever since—against the corruption and bias of the national political media, and to his mortal threat to their ability to be the determinant of who rises and falls in American public life.

He despises them, and they hate him. The result is the abandonment of any pretense of normal professional standards of impartiality and fairness and of distinction between reporting and comment.

Whatever the fluctuations in the polls of the candidates, there’s a broad consensus in the United States that the media isn’t trustworthy. A free press is essential to democracy, and the long-term consequences of widespread public disrespect for the media are likely to be very serious.

The general media description of contemporary America would lead one to believe that African Americans are physically afraid of whites, that is, of white men but not of Antifa, and that white men are rioters but Antifa is not. Indeed, it is widely believed, including by prominent Democratic members of the Congress that Antifa doesn’t exist.

The American media on the left generally believe that a rising China is good for peace, that Iran is entitled to a bomb to be safe from Israel, that boys can be girls and girls can be boys, that police make African American districts more dangerous, that windmills are good and nuclear power is bad, that high taxes increase the incentive to work harder, that printing money isn’t inflationary, and that third-trimester human babies aren’t people, and disposing of them even after they have been born isn’t infanticide.

As a friend who is a professor in Alabama put it to me recently: The authors of the terrors of the French and Russian revolutions “were humanistic geniuses compared with the modern suburban housewife driving a Volvo, recycling plastic, with two rescue dogs, who attends the local Unitarian church to affirm her life force.”

Respect for the Office

The overwhelming success of the presidency of the United States between 1933 and 1963 created a mystique for that office that commanded the respect of everyone through difficult times, in which the United States was under potentially mortal threat from economic depression, Nazi Germany and Japanese imperialists, and international communism led by the Soviet Union.

President Roosevelt brought the country through the recession and through one of the most just wars in history, which the United States entered only as a result of an unprovoked and premeditated attack.

Presidents Truman and Eisenhower created and operated the institutions that ultimately won the Cold War, defended the perimeter of the Free World, and gave the nation peace and prosperity.

President Kennedy was a promising successor who managed the Cuban missile crisis capably and is remembered with increased affection because of his brutal assassination.

So great was the confidence vested in the president that in 1955, the U.S. Congress voted almost unanimously in both houses (410–3 and 83–3) to grant Eisenhower the right to deploy any level of force he judged appropriate, including nuclear weapons, to protect what he defined as the national interest of the United States in the Far East against the People’s Republic of China.

It was a blank check covering thermonuclear weapons, and the world was fortunate that the recipient of it was a great but cautious and humane military commander who knew how to deal with trigger-happy members of the Joint Chiefs of Staff.

Vietnam, the vastly overblown Watergate affair, and the shilly-shallying of the Carter presidency eroded public confidence that was yet substantially reconstructed by the successes of the Reagan administration.

But the bloodless victory in the Cold War left America without a plausible enemy that represented a threat to the country’s existence. As President Lincoln said in 1838, no foreign army will ever “by force take a drink from the Ohio River or leave a track in the Blue Ridge. … As a free nation, we will live forever or die by suicide.”

In the absence of a genuine foreign threat, for the first time in 85 years, the United States has experienced the rise of domestic movements of violent national self-hate. They have no legitimacy, and they ultimately have little to complain about; the United States is much more a good country than a bad one, and Americans don’t have a national death wish.

But this fault-finding and widespread violence that was ignored by the Democratic Party from the municipal level to the national leadership all summer won’t be addressed by platitudes about bringing the nation together. It can only be addressed by a combination of appropriate reforms, determined law enforcement, and high economic prosperity.

President Trump is the only candidate capable of producing that policy prescription, and it’s still difficult to believe that on the day, Nov. 3, the public will fail to perceive that.