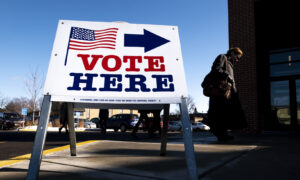 Two officials in Georgia have provided statements regarding a viral video that shows a contractor for Dominion Voting Systems in the state handling a USB drive while moving between computers.

The two-minute video of the incident, shared on Dec. 1, showed the election contractor moving a USB drive from a computer to a laptop. He then stands at the laptop for a while before leaving the area with the USB stick. During the incident, another man in a red hoodie sits nearby.

The video was first uploaded to YouTube and shared via Twitter by software and cyber security analyst Ronald Watkins, whose announcement credits Twitter user @launa_usa and suggests that the video was taken late Monday or late Sunday. The incident occurred at Gwinnett County Election Central, he noted.

County spokesperson Joe Sorenson told The Epoch Times in an emailed statement, “To clarify, the USB drive was not inserted into a scanner, the scanners are connected to server through cables.”

“This would be a Dominion tech producing a data report on the server and saving the report to a Dominion USB thumb drive and then using a laptop to filter requested information,” Sorenson added. “The Dominion servers are not equipped with Excel and counties are not authorized to install any hardware or software on these systems.”

Georgia’s voting implementation systems manager, Gabriel Sterling, issued statements at a press conference on Dec. 1 where he spoke about a contractor whom he described as a “tech in Gwinnett County” who was “transferring a report on batches from an EMS [Election Management Server] to a county computer so he could read it.”

“Young man contractor, basically somebody took a video of him manipulating election data off of the recount. It was wrong,” Sterling said of the Dominion worker. “And then people are accusing him of treason,” he said, adding that the worker has received “death threats.”

“He’s just a contractor, and now he’s got it. He’s got a name. I’m not gonna say it to spread the name more, but it’s a unique name,” he said, adding that “So apparently they’ve tracked down family members and harassing them as well.”

The worker was “just trying to do his job,” Sterling said. “I talked to Dominion today and they said he’s one of the better ones they got.”

The Epoch Times is withholding the Dominion contractor’s identity due to Sterling’s allegations of “death threats” against the worker.

Dominion and the Georgia secretary of state did not immediately respond to The Epoch Times’ requests for comment on the contents of the video.

Dominion said in a statement on its website on Dec. 1, “Dominion employees are being forced to retreat from their lives due to personal safety concerns, not only for our employees themselves, but also for their extended families.” The company added that it “will not comment further about our personnel” due to safety concerns.