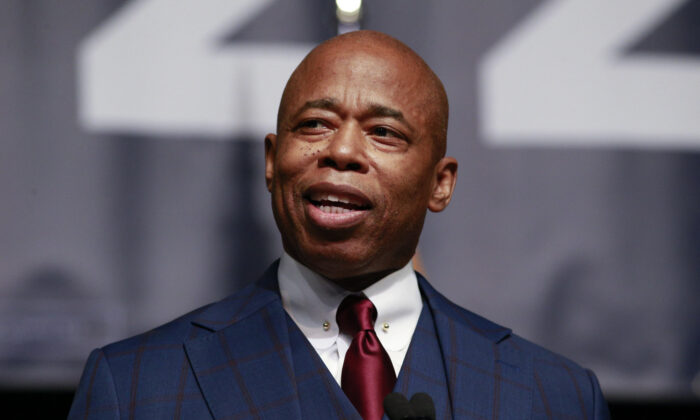 The office of New York Mayor Eric Adams announced on July 23 that more than 200 city workers were fired for failing to get vaccinated against COVID-19.

The latest additions bring the total number of terminations in the city to 1,752 as of July 13, a spokesman for Adams’s office told the New York Post. He declined to provide a list of departments where the jobs were cut.

About a month later, the city fired another 101 workers for not complying with the mayor’s COVID-19 vaccine mandate, including 42 in the Education Department.

In March, Adams became the subject of criticism for exempting athletes and performers not based in New York from the mandate, while keeping the rule in place for private and public workers.

“This exemption sends the wrong message that higher-paid workers and celebrities are being valued as more important than our devoted civil servants, which I reject,” New York City Council Speaker Adrienne Adams said, questioning the Democratic mayor’s decision.

New York had some of the most restrictive mandates in the country, requiring almost all employees in various government agencies to be vaccinated and requiring private employers to ensure that their workers were vaccinated as well.

In June, Adams offered some workers who were fired in February and March the opportunity to get their old jobs back, but only on the condition that they get fully vaccinated. They were given until June 30 to get the first dose and then make arrangements for a second dose by Aug. 15. The Post first reported the development.

The mayor’s office declined to reveal how many of the former public-sector employees agreed to the offer and planned to return to work. Ex-employees in the Education Department are expected to receive a letter later in the summer, a city spokesperson said.

Other than the 1,752 employees in various government agencies who were recently terminated, more than 6,000 city workers have applied for medical or religious exemptions from the mandate, but have yet to receive an answer.