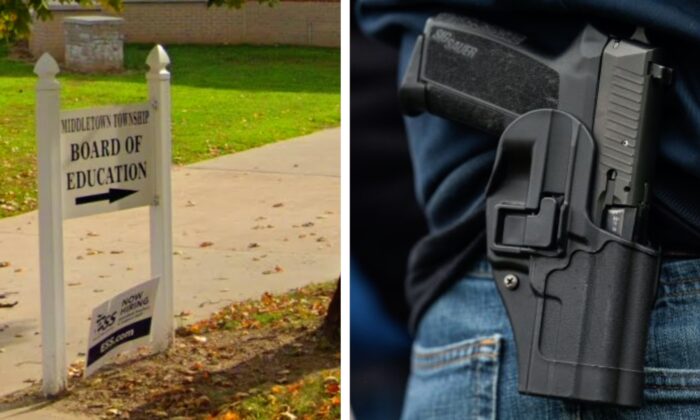 The Middletown Township Board of Education. (Google Maps/Screenshot via The Epoch Times); handgun in a holster in a file photo. (David Ryder/Getty Images)
US News

A large school district in New Jersey has approved to enhance student protection by hiring off-duty police and then retired officers to patrol inside school buildings. The guards will be armed and present through at least the end of the 2022-2023 academic year.

The latest to approve the policy was the board of education of the Middletown School District, NJ.com reported. The measure was unanimously passed last week in the wake of a mass shooting at an elementary school in Uvalde, Texas that killed 21 people, including 19 children.

In a letter of intent (pdf), approved measures have been detailed. It outlined that an off-duty police officer will be placed at each of the district’s 16 schools through the end of the 2021-2022 school year. The assigned officers will carry guns and will be paid “at a rate of $50 per hour.”

For the upcoming 2022-2023 school year, Class III Special Law Enforcement Officers (SLEO) will be assigned to each school “at a rate not to exceed $35 per hour.”

“In addition to the aforementioned hourly rate, the Township shall provide the District with ancillary and start-up costs, which the Parties will determine how those costs will be shared,” the letter reads.

Class III SLEO must have retired from law enforcement within the past three years and cannot be older than 65, according to the New Jersey School Boards Association. While Class I and Class II SLEOs have the authority to issue warrants for certain offenses, they do not possess full policing powers like Class III SLEOs, who are authorized to carry firearms, likely a 9mm sidearm.

Jocelyn Gottschalk, a parent of three whose children attend the Middletown School District, detailed to “Fox & Friends First” how parents have rallied around the idea of having armed security personnel inside school buildings.

“It gives me more peace of mind,” Gottschalk said. “I’m still not 100 percent confident … that things are going to be smooth, but it gives me enough confidence that I feel comfortable sending my kids to school now.”

“I second-guessed sending my kids to school after the tragedy, quite frankly, and I did,” she continued, adding that she is feeling better now after the district approved the measure.

Gottschalk said she hasn’t met anyone yet who disagreed with the new policy, explaining that it doesn’t make sense to her that there is security at many events nationwide, but guards at schools are still very limited.

“We have security at sporting events, concerts, and we send our kids to school with no security after all of these things happening,” Gottschalk said. “It just doesn’t make sense to me, but I hope that this is a step forward and maybe other towns and boards will get involved and do the same.”

Jacqueline Tobacco, the board of education vice president, said in a statement that the approved measures will build on other efforts to put children first and keep students safe.

“This action, along with increased funding for mental health services, is a commitment from our administration, board, and township to put our children first and foremost,” Tobacco said.