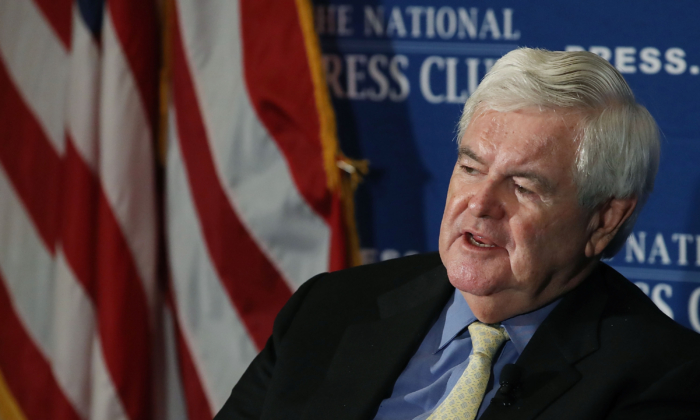 Newt Gingrich: 2020 Election May Be Biggest Presidential Theft Since 1824

Former Republican House Speaker Newt Gingrich said the 2020 election may have been subject to the biggest theft in nearly two centuries.

“The more data comes out on vote anomalies that clearly are not legitimate the more it looks like 2020 may be the biggest Presidential theft since Adams and Clay robbed Andrew Jackson in 1824. State legislatures should demand recounts,” Gingrich wrote on Twitter on Nov. 27.

President Donald Trump and his allies are waging legal battles in several states in a bid to identify and disqualify potential illegal votes or to invalidate the election results in those states entirely. The lawsuits have served as vehicles for the release of sworn affidavits from witnesses who detailed widespread malpractice and alleged fraud in the 2020 election.

In an op-ed for The Epoch Times written earlier the same week, Gingrich said that the “thieves” who stole the 2020 election “got sloppy.”

“Stealing the 2020 election was a mammoth undertaking, involving widespread lawlessness and illicit partnerships between private actors and public officials. They’ve been working to cover their tracks since Election Day, but they didn’t work fast enough,” Gingrich wrote.

“Now, the courts need to stop them from destroying any more evidence so that the people of Pennsylvania—and the rest of the country—can accurately assess the ramifications of their wrongdoing.”

Recounts were ongoing on Nov. 29 in Georgia and Wisconsin.

Rudy Giuliani, the attorney leading Trump’s post-election legal effort, testified in a special session held by Pennsylvania state lawmakers last week. The lawmakers also heard from a number of witnesses who alleged fraudulent activity taking place during the processing, counting, and reporting of the votes.

“This voter fraud that took place, which as you will see from the witnesses that we call, had several dimensions to it, several different ways in which it was done. The most dangerous thing is, it is very, very similar in at least six states that we’ve been able to study,” Giuliani said.

Following the hearing, Pennsylvania’s Republican state lawmakers said they were gathering support for a resolution to decertify the state’s election results and appoint presidential electors through the legislature.

Trump’s legal team said a hearing similar to the one in Pennsylvania will take place in Arizona on Nov. 30.