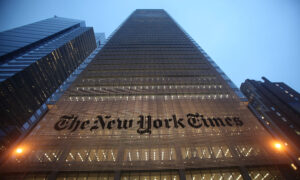 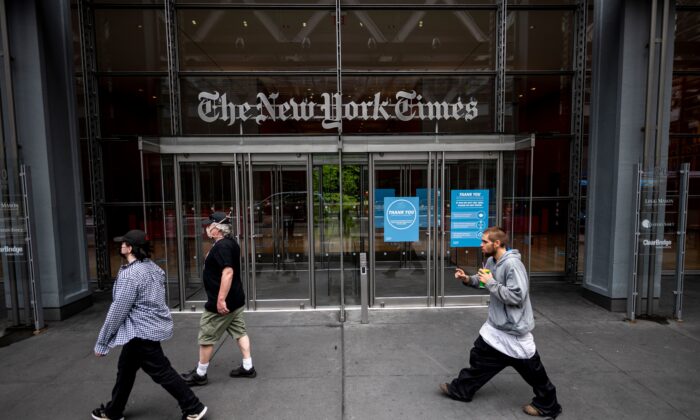 The New York Times building is seen in New York City on June 30, 2020. (Johannes Eisele/AFP via Getty Images)
US News

The New York Times recently updated a piece on Facebook’s moderation of satire, removing a claim that Babylon Bee “trafficked in misinformation.”

The New York Times, in the middle of a court battle over allegedly defamatory articles, which, according to a judge, said reporters failed to note that they inserted opinions, made the update and issued a correction after receiving a demand for a retraction over claims about the Babylon Bee, a satire website.

Mike Isaac, whose byline is on the piece in question, “authored a defamatory article” by claiming the Babylon Bee “sometimes trafficked in misinformation under the guise of satire,” lawyers for the Bee told the NY Times in a letter (pdf) earlier this month.

The misinformation claim was hyperlinked to an October 2020 piece that “contains no mention of ‘misinformation’ whatsoever,” lawyers added.

The paper updated the article from Isaac, which was published in March, on June 10.

All reference to the Bee was removed, except for in the correction.

“An earlier version of this article referred imprecisely to the Babylon Bee, a right-leaning satirical website, and a controversy regarding the handling of its content by Facebook and the fact-checking site Snopes,” the NY Times said in the correction.

Snopes “fact-checked” a Bee article in 2018 that said CNN bought an industrial-sized washing machine to “spin” the news. Snopes deemed the article “false.” Facebook promoted the fact-check. Snopes later adjusted its article, changing its rating to “satire” and acknowledged that the Bee describes itself as a satire site.

Facebook labeled the story “false news” but later told news outlets: “There’s a difference between false news and satire. This was a mistake and should not have been rated false in our system. It’s since been corrected and won’t count against the domain in any way.”

The October 2020 story used as evidence by the NY Times that the Bee promoted misinformation said the Bee “found itself walking the thin line between satire and fact in 2018, when it joked that CNN purchased an ‘industrial-sized washing machine for spinning the news.'”

“However obvious it should have been that the comment resided on the satirical side of the ledger, it still led to an awkward vetting by the fact-checking website Snopes and Facebook,” the author wrote, neglecting to add that Snopes and Facebook walked back its so-called fact checks. That piece has not been updated.

In an email, Bee CEO Seth Dillon told The Epoch Times that he thinks what the NY Times did “is part of a deliberate strategy.”

“The social networks have been working hard these past few years to stop the spread of fake news, and they do so not just by flagging it, but by banning sites and individuals who spread it. If you don’t like us, the quickest and surest way to get us deplatformed is to lump us in with fake news. And they do that by constructing a narrative that says we’re trafficking in misinformation ‘under the guise of satire,'” he said.

“But that’s a claim about our intentions, our motives. How do they know what motivates us? They don’t, of course. But they’re perfectly willing to use misinformation to smear us as being a source of it. And that’s not merely ironic; it’s malicious.”