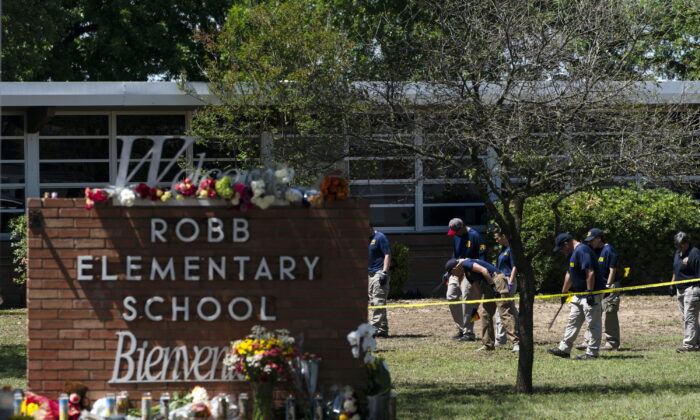 Investigators search for evidences outside Robb Elementary School in Uvalde, Texas, on May 25, 2022, after an 18-year-old gunman killed 19 students and two teachers. (Jae C. Hong/AP Photo)
By Jack Phillips

Video footage posted online Tuesday appeared to show how police officers responded to gunshots that were fired by an 18-year-old suspect at Robb Elementary School in Uvalde, Texas.

The video, first obtained by the Austin-American Statesman, shows officers going into Robb Elementary on May 24 after Salvador Ramos started his deadly rampage that left 19 kids and two teachers dead.

The video then shows law enforcement arriving about three minutes after the shooter. They were seen walking toward the classroom but shots are then heard being fired, and they then move to the end of the hallway.

The video can be seen below (Warning: Disturbing footage):

Heavily-armed officers are then seen walking around in the hallway, leaving, coming back down the hallway, speaking to each other, and making calls apparently as Ramos was inside the classroom, according to the video.

At 12:21 p.m., about 48 minutes after Ramos entered the school, he fired four more gunshots, according to the footage. Several officers responded by getting near the classroom door but did not enter.

After about nine minutes, the video shows one officer using hand sanitizer. But still no response.

Officials previously said that it took 77 minutes for police to breach the classroom where Ramos was located before shooting and killing him.

Texas Department of Public Safety Director Steven McCraw said in June that the law enforcement delay was an “abject failure” while noting there were discrepancies in how local officials described the response.

Earlier on Tuesday, Texas state Rep. Dustin Burrows, a Republican, wrote on Twitter that the surveillance video would be released to the Uvalde community before it is sent out to the public. The release also included footage of Ramos crashing his vehicle into a ditch and shooting at two people who approached, which was previously discussed during news conferences with Texas officials.

It also showed the shooter, who was clad in black, walking down the hallway of the school as he pulled his hair up and was holding onto his rifle with one hand. A boy is then seen peering around the corner right before Ramos opened fire, but the boy then ran in the opposite direction. The child was not identified by officials.